An Ottawa-based company is disappointed after the multi-million dollar satellite equipment they helped design got lost in space, stalling Canadian research into the perplexities of black holes.

“We had a month or six weeks of getting some data back … and the reports that we were hearing was that it was really excellent data,” said Paul Nephin, chief executive officer of Kanata’s Neptec Design Group Ltd. 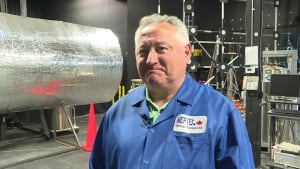 “Doing work in space is not easy, so you’re going to have disappointments,” said Paul Nephin, CEO of Neptec Design Group. (Robyn Miller)

“We had high hopes that this was going to be a successful mission for us.”

Neptec designed hardware for the ASTRO-H telescope, also known as Hitomi, as part of a partnership between Canada and Japan.

The Canadian technology sharpened the telescope’s vision, helping it detect a wider range of X-ray colours than other X-ray telescopes.

On Thursday, the Japan Aerospace Exploration Agency announced that it would stop trying to fix the satellite after losing contact on March 26, more than a month after the satellite’s launch from southern Japan on Feb. 17.

Neptec was contracted to support the mission for the next three years, but Nephin says the financial loss is no “big deal.”

“The bigger impact is on the scientific community who aren’t going to have access to a very sophisticated instrument,” said Nephin.

“A lot of science that was planned to be done over the next three to five years is going to be delayed or won’t get done at all.”

Neptec now plans to analyse the data Astro-H was able to collect before it disappeared, while also working to build a more advanced version for a future mission sponsored by the European Space Agency.