A City of Ottawa manager has responded to criticism there were no public consultations on a significant playground project at Mooney’s Bay Park by referring back to consultations that were held in 2000.

The process of building what’s billed as Canada’s largest playground is going to be documented on a TVO show, with an opening expected by Canada Day 2017.

However, residents in the area soon started speaking out about the lack of chances to weigh in on the project, which they say will negatively affect traffic patterns, access to the Rideau River and the environment.

On Wednesday, councillor and Community and Protective Services committee member Keith Egli called on the city’s general manager of parks, recreation and cultural services to answer questions about the plans, including the lack of public consultations. 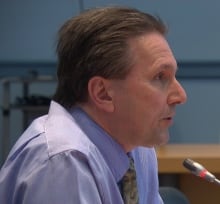 “Back in 2000 a redevelopment project was undertaken for Mooney’s Bay Park and as part of that, a discussion was held and much consultation with the community on priorities,” said Dan Chenier to the committee.

Chenier said the city has delivered on some of the priorities, such as new pedestrian and cycling paths, but others such as better play equipment for children and upgrading the recreation services it offers are still being worked on.

“That’s how we came to the agreement that this type of amenity being added to the park was consistent with the long-term vision of the park and what we were trying to do there,” he said.

Chenier said Sinking Ship Entertainment came to the city in January to talk about potential sites after checking with the National Capital Commission.

Chenier said the city is contributing a maximum of $959,000 from its city-wide cash in lieu of parkland fund, which is half the cost of the playground, and any cost overruns won’t be the city’s responsibility.

He added that Sinking Ship Entertainment is crowdfunding and looking for sponsorships to cover its share of the funding, as the company has done in the past.

A volunteer recruitment session is being held June 1 to share ideas about the project, according to the city, but a location has not been announced.

Chenier said the planners want to hear from children across the country for their ideas on what they should put in each “province” and they’ll be flying in children from different parts of Canada over the summer to do this.

Because of those consultations and their effect on the construction timeline, Chenier said the Tim Hortons Ottawa Dragon Boat Festival and HOPE Volleyball Summerfest will have to move a few things around from their normal Mooney’s Bay setup, but they won’t have to downsize their plans at all. 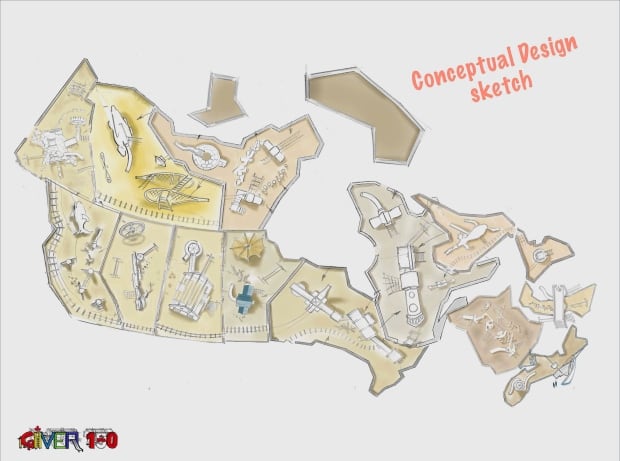 The playground will be shaped like Canada with each province and territory having its own unique play space. (Submitted)

Not against any rules

After the meeting, Egli said he wanted to talk about the playground during the committee meeting because of all the questions he had been getting from constituents, and he found it helpful to have some transparency.

“When dealing with private companies sometimes there are restrictions put on your discussions, but in a perfect world it’s public money — at least a good chunk of it is public money — and we should have these sorts of discussions in the public,” he said.

Committee chair Diane Deans said she would have preferred to have public consultations, but in the end the park’s approval didn’t break city rules and will be good for tourism.

“This is a million dollar opportunity for the city… I can tell you there are lots of other cities across Canada that would love to get a million dollar benefit of a unique Canada 150 project playground,” she said.

“I think in many ways we’re very fortunate… we’re attracting tourism to our city and Canada 150 because of this project so there’s lots of benefits as well.”

Deans said these kinds of offers are rare, so she doesn’t think the agreement will set any kind of precedent.