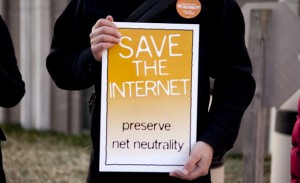 Got questions about net neutrality? Join our live chat Jan. 22 at 7 p.m. ET and ask our panel of special experts. (Getty Images)

“One of the founding ideas of the internet” was killed last week.

Net neutrality, a bland term for an idea so passionately championed by so many people working in tech and media, is that founding idea according to David Christopher, communications manager for openmedia.ca.

It is the principle that all data on the internet should be treated equally, and that internet providers should be prevented from getting special treatment or access to that data. Net neutrality activists believe that average citizens like you or I should be guaranteed the same access online as corporations and large internet service providers.

The Associated Press puts it this way:

In Canada, the CRTC is now seeing at least one case involving mobile phone access fees to the internet, according to Radio-Canada International.

Just last week, an appeals court in the U.S. struck down the FCC’s net neutrality rules, after a challenge from Verizon, provoking concern from supporters of easily accessible internet around the world.

“This decision — if it remains unchallenged — raises the possibility that large internet service providers could charge certain companies extra for delivering their content to subscribers, and give preference to the content coming from those who are willing pay them a fee, or have cut some other kind of deal,” writes GigaOm’s Mathew Ingram.

“In effect, the democratized nature of the internet would be replaced by a feudal system in which the ability to reach a consumer would be auctioned off to the highest bidder”

What does this all mean for you? What services will consumers have access to in future? What does the future hold for open media in Canada and the world?

Join Live Online host Lauren O’Neil for a live chat on Jan. 22 at 7 p.m. ET and get your questions answered by our panel of special experts.

Ottawa: The Secret Behind Nick Vandergragt