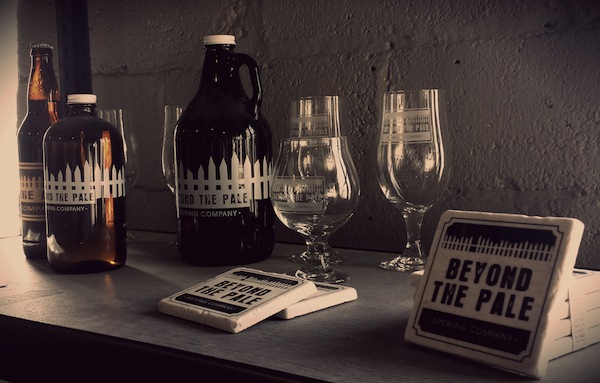 All photos by Amanda Armstrong.

The brainchild of Shane Clark, Rob McIsaac, and Shane’s dad, Al Clark, Beyond the Pale first opened its doors on November 29th, 2012 and has quickly become one of Ottawa beer lovers’ favourite breweries. In anticipation of their tap takeover with Beau’s Brewery this Saturday at Corner Bar and Grill in Westboro, I sat down to chat with Shane and Rob about their first year brewing beer in Ottawa.

The brewery has been Shane and Rob’s full-time job since the first weekend they opened. The best part of their first year, they agree, is that it went so well. “I thought it would stop being surreal after 2 months” Shane remarked, “but it continues to be surreal every day”. The guys opened Beyond the Pale with a desire to brew great beer, something they are super passionate about, and to have fun. They’re serious about producing high-quality beer, but everything else is about having a good time. The main goal is fun.

The tap takeover will be a chance for people to try a bunch of great beers, including some lesser known ones. Additionally, Beyond the Pale will be releasing their second beer in the Bigamy series: The Second Marriage. The first in the series, the Ball Dropper, was released in time for New Year’s Eve and the third is due out in about a month’s time. The series features a group of continuously hopped beers, made by pairing El Dorado hops with another kind of hops. Bigamy: The Second Marriage, for instance, is continuously hopped with El Dorado and Centennial hops.

Along with Bigamy: The Second Marriage, Beyond the Pale will be bringing along Party Animal, Imperial Super Guy, Darkness, and my favourite, Pink Fuzz this Saturday. As far as crowd favourites go, the special releases are always a best seller, but Pink Fuzz has become Beyond the Pale’s gateway beer. To Shane and Rob’s pleasant surprise, the market in Ottawa is much more ready to drink more aggressive beers than they’d thought and once you’ve tried and fallen in love with Pink Fuzz, it is easy to fall in love with every other beer they make. Rob McIsaac, Al Clark, and Shane Clark, owners of Beyond the Pale Brewery.

Releasing roughly 20 beers in 2013, the brewery has come up with some creative beers with catchy names, and continues to experiment. Some beers have a name at conception and the beer is developed to suit the name, but it often happens the other way around. Most beers have a concept and no name. Once produced, the guys begin the naming process: drinking glasses of said new beer until they come up with a suitable name.

This coming year the brewery will be expanding from a three-barrel to a 15-barrel brew system (currently being made by a Canadian company in Victoria, BC). In addition, the best of the Bigamy series will become their first IPA release in the LCBO, where they plan to begin distribution in 2014. In the meantime, make a visit to the brewery at 5 Hamilton Avenue North, or enjoy one of their delicious beers at many local bars and restaurants.

The tap takeover is being held at Corner Bar and Grill, located at 344 Richmond Road, starting at 6pm on Saturday January 25th, 2014. Follow Beyond the Pale on Twitter or Facebook, or see their website for more information.