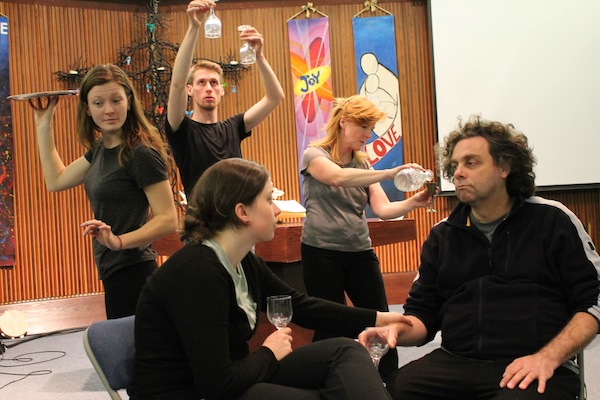 It isn’t often a play staged in a bar takes on the role of Christianity in modern culture. Thus on the coldest night of the year we settled into The Mercury Lounge with a glass of wine and the day’s headlines of the Joe LeClair affair on our mind eager to see how this production would address the controversial role of organised religion.The narrative of the play loosely follows Megan (Megan Piercey Monafu) a young Christian conflicted by her faith. Megan’s concern about the exclusion of homosexuals is further challenged by punitive behaviour of the Church when she expresses her inner torment on social media. Megan tries to establish if an apology from the Church is possible or even meaningful. Alongside this very loose storyline, “snapshot” experiences with the church are interjected throughout. Dialogue for Grain of Salt is based on interviews with individuals on the role of Christianity in their lives that were woven together and re-contextualised to create the storyline on stage. It explains the chaotic nature of many scenes but does nothing to detract from the possibility of any coherent central theme.In its hectic nature Grain of Salt fails to tackle the rich topic of theology in a meaningful or cohesive fashion. The production never fully engages with controversy in a significant manner, restrained by a sophomoric approach to Christianity as Good vs Evil. The contradiction between the church’s message and its action, the tackling of the worst offenses or even exploring the grey area of declining church membership in the face of the growth markets in “alternative spirituality” are never embarked upon – it’s a missed opportunity. When controversial topics such as child-abuse, wars and abortion arise they are covered in a checklist-like manner to make Megan’s personal struggle a comparison.

Several scenes manage to stand-out as successful – the metro ride enactment, the coffee shop and the game-show, “You’re not getting in” demonstrate sparks of unique talent as well as highlight the need for this production to sharply edit itself down to the scenes that work. The play would be stronger as a streamlined two-hander with Megan and her friend (Mitchel Rose) taking on the multiple “snapshots” roles; especially with the long pauses, communion scenes, prayer circles and songs edited out.

A great topic with entertaining moments but a production that, despite efforts, left us, like the weather outside, cold.

Grain of Salt, presented by the 9th Hour Theatre Company runs until January 31. Please note that venues and showtimes vary. For more information and to purchase tickets, click here.