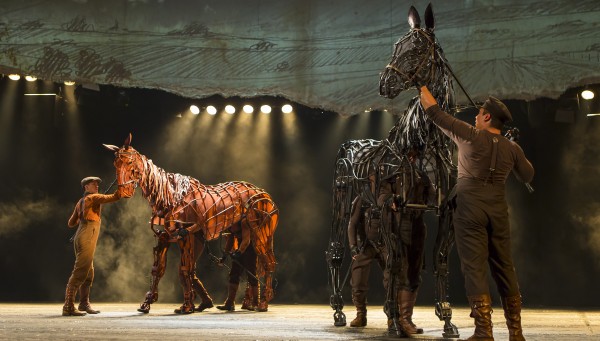 It seems that a lot of people love the story of War Horse. It’s an emotional and touching tale about a boy named Albert and his horse, Joey, in wartime England in 1914. We saw it on opening night at the National Arts Centre on January 21 and the audience gave it a standing ovation.

War Horse is based on Michael Morpurgo’s 1982 children’s novel of the same name. And in addition to being a Broadway play, Steven Spielberg adapted it to film in 2011. It’s also playing to packed houses in London, New York and Toronto.

The beauty of the play is that no animals were harmed in the production of this musical, because the animals were magnificent puppets, created by South Africa’s Handspring Puppet Company.  The larger-than-life protagonist horse moved gracefully and majestically across the stage. Its mannerisms, heaves and sighs, although controlled by humans on stage, really resembled a living breathing horse. There were birds, too, and the musical seems to explore the value of animal life versus human life in a meaningful way.

We found that the story lacked complexity, even though it was set during World War I, a time of great social and political strife. This isn’t necessarily problematic, but the story itself was quite linear. Boy finds horse, horse grows up, horse gets sturdy, horse goes to war, boy goes to war…we won’t give away the ending if you haven’t seen it, but it is very satisfying.

The acting by all accounts was well done, the singing enjoyable, and there were some memorable action packed scenes. For example, when Joey boy horse becomes a man horse, the small puppet transforms to a larger one in an amazing way. The battle scenes captured the darkness of war, men were thrown off horses, explosions, gunfire…

The set captured the mood of the time. Everything was cast in black and grey and very austere. The backdrop was a strip of paper, meant to look like it had been roughly torn from a notebook. Various illustrations like maps and houses were projected adding to the musical’s historical feel.

In short, War Horse was enjoyable to watch, and if you have seen the film or read the book and enjoyed it, you may find this adaptation interesting.

Weekend roundup: What to do in Ottawa ...