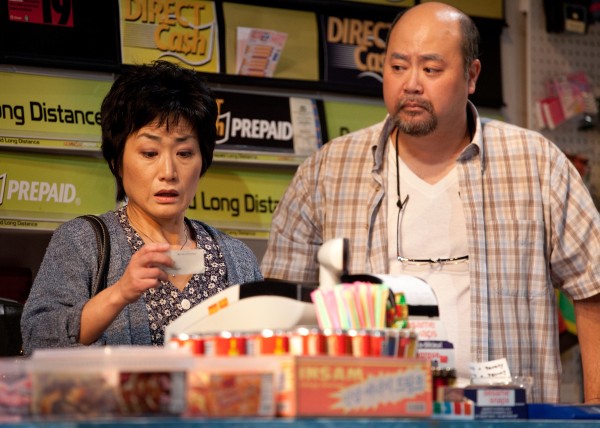 We’re giving away a pair of tickets to the evening show of Kim’s Convenience on Saturday, February 1. To enter the contest email apartment613@gmail.com by noon Wednesday with the subject line “Kim’s Convenience – Contest.”  The winner will be notified on Wednesday afternoon.

To quote playwright Michel Tremblay, “Why should we be surprised to see our people on our own stages?”

Kim’s Convenience, which is playing at the National Arts Centre until February 8, is a short (85-minute) distillation of the inter-generational clashes that inevitably arise between first- and second-generation Canadians.

The first generation is Mr. and Mrs. Kim – Appa (Father) and Umma (Mother).  They’re late middle-aged immigrants from Korea who have been running a convenience store for decades in Toronto’s tough neighbourhood of Regent Park.   Appa defines himself by his store: It’s more than a store, he says, “it’s my story” and”The community needs me.”  His store is his legacy, and he’s bound and determined that the next generation take it over from him.

But their Canadian-born children – 30-year old Janet and 32-year old Jung – are taking paths neither of their parents had planned for them.

Janet is a professional photographer and (gasp!) still single.  Or as her father says, “your expiration time is over”.  She and her Appa can’t talk to each other without it degenerating into a shouting match.

When he was 16, Jung had an epic fight with his father and fled the family with the contents of the store’s safe.  He hasn’t seen his father since.  He’s been in (unspecified) trouble with the law, has a dead-end job at a Discount Car Rental agency, and is the father of a two-month old baby boy.  But he frequently has a rendezvous with his mother at her church.

There are another 4 characters, all played by Andre Sills.  One of them is a recently wealthy businessman who wants to buy Kim’s Convenience.  It seems Regent Park is being overrun by condo towers, and the property will be very valuable as the neighbourhood goes upscale. The main character Sills plays is Alex, who is Jung’s boyhood friend, and the guy Janet has had a crush on for almost two decades, and who is now a hunk of a Toronto cop. The playwright, Ins Choi (who also plays Jung), had me in the first scene.  Appa (the excellent Paul Sun-Hyung Lee) starts his day with a big mug of coffee or tea, into which he pours at least a half cup of sugar.  Just like my Polish Grandad used to do!

Once you get the hang of Appa and Umma’s thick accents (kudos to the dialect coach, Liza Paul), the script is very amusing.  There was lots of warm laughter from the opening night audience.

Appa gets most of the great lines – he’s got chutzpah (or whatever the Korean equivalent of chutzpah is) – and an endearing amalgam of shrewdness and gruff tenderness.  But Janet (a feisty Grace Lynn Kung) gives as good as she gets.  She and Appa go at each other in a rapid-fire exchange in which she claims he owes her over $100,000 for all her unpaid labour in the store and he starts toting up all the piano lessons, summer camps and transit passes he’s paid for.

Umma (Jean Yoon) is a sweet and saintly woman who (guess what!) reminds me of my dearly beloved Polish Grandma.  Her scenes with Appa are absolutely perfect.  You can believe that these two people have had a long hard life together but still tenderly love each other.

Choi’s Jung is the weakest character.  This may be because Jung is on stage so little.  Or it may be a problem with how the character is written. Or it may the fault of Choi’s acting ability – I found him a bit wooden.

Is the play perfect?  No.  Two key plot developments take place in an unbelievably compressed timespan.  But I can forgive these flaws in the play because of the lovable nature of the characters.  As my friend Patsy said, “I liked this play because these are people I know.”

Both Patsy (who saw the production in Calgary) and I were thoroughly impressed with the set. Ken MacKenzie has created a very realistic convenience store – it looks as if you could saunter onto the stage and grab a Caramilk and a pack of smokes.  And Thomas Ryder Payne’s sound design includes ambient traffic noise which helps with the suspension of disbelief.

Having told you all of this, I’ll now fess up to something.  I went to Kim’s Conveniene with middling expectations.  So often when a Toronto production has been praised to the skies, I’ve been underwhelmed when I’ve finally seen it in Ottawa.  Not the case this time, I’m pleased to say.

Kim’s Convenience is playing at the National Arts Centre until February 8.  Tickets start at $23 while live rush student tickets are available for evening performance on Tuesday, Wednesday and Thursday.