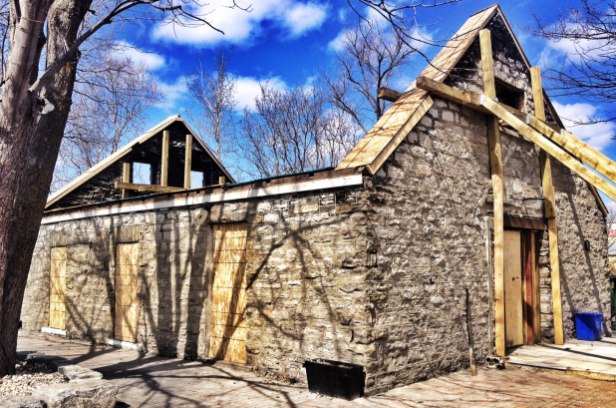 The Cheshire Cat Pub was gutted in an electric fire on Jan. 28, 2013. It reopened last month.

When a popular Carp pub was gutted in a fire last year, it was no question for Dustin and Crystal Therrien to rebuild the local watering hole.

The Cheshire Cat Pub at 2193 Richardson Side Rd. closed after an electrical blaze destroyed everything but the four stonewalls and kitchen frame early on Jan. 28, 2013. With $800,000 in insurance, the bar reopened last month.

“It’s pretty much the same pub,” said Dustin Therrien, who has co-owned the venue for nine years.

They wanted to recreate the “English-Canadian country-style pub” that was originally a schoolhouse in the 1880s. The wood stove and rustic furniture have been replaced, as have two wing-back chairs – the most coveted seats in the venue.

“People asked me if they made it through the fire,” he said, with a laugh.

Therrien said he’s still rebuilding the “monster whiskey collection.” Two hundred bottles were lost in the fire and the restaurant now has a mere 65.

Known for its fish and chips and nearly two-dozen draft beers, the taps are flowing under the flood of returning regulars. The duo can’t take reservations yet. It’s too busy.

“It’s funny,” said Therrien. “I think people missed it as much as we did.”