The union representing Ottawa police officers wants the chair of the city’s police services board to step down, but Eli El-Chantiry says he won’t resign.

On Friday, the head of the Ottawa Police Association, Matt Skof, and the union executive officially called for El-Chantiry’s resignation.

Skof said he hopes to improve oversight of the top brass at Ottawa police.

The resignation call comes the same week Ottawa Police Chief Charles Bordeleau issued an open letter on a spike in drug-related violence in the city.

A veteran Ottawa Police Service constable sent an email claiming there were a number of internal issues in the force, including that proactive policing — especially patrol work — had been eroding away.

El-Chantiry had said the constable’s email did not reflect the overall sentiment on the force, but Skof then tweeted that El-Chantiry had “forgotten” about declining morale among Ottawa Police Service members.

Skof said Friday that the union’s concerns with the police board’s leadership predate this week’s public spat,  and that El-Chantiry needs to improve the oversight of the police executive. 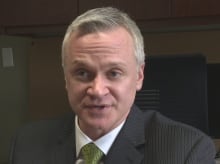 “We have a couple of incidents now where this is showing to be ineffective and eroding the public confidence in our police service and it needs to be addressed,” Skof said.

Skof told All In A Day host Alan Neal that two provincial oversight bodies — the Ontario Civilian Police Commission and the Office of the Independent Police Review Director — are not satisfying the union’s desire to follow up on complaints about the police executive, so the police board needs to step up.

One of the complaints involves the hiring of private security officers at the city’s courthouse and what Skof alleges were “misleading” comments in a report about that decision submitted to the police services board.

Skof said the union’s call for El-Chantiry to step down has nothing to do with his work as a city councillor, but is purely based on his time heading the police services board.

“It’s their job to oversee the executive,” Skof said. “It’s been made very clear that that’s not going to occur.”

Dialogue should be private, El-Chantiry says

Skof said a new board chair would make a difference and that any of the board’s other six members would have the experience to fill that role.

“The only outlet we have right now is for the public to be advised that there is a break in the investigative process and that transparency is non-existent right now,” Skof told CBC News.

El-Chantiry responded Friday in a written statement, saying he takes his oversight role “seriously” and he has “no intentions of resigning.”

“The members of the Ottawa Police provide excellent service to the residents of Ottawa. I support them in their work,” El-Chantiry said.

“They have a difficult job. I appreciate that and I understand there are frustrations.”

El-Chantiry said Skof refused a face-to-face meeting this week. He also said Skof’s frustration about provincial oversight won’t be solved by changing the board chair.

“It is not constructive when [dialogue] is carried out only in the media. Therefore, I will not be providing further comments,” El-Chantiry wrote in his statement.