Councillors on Ottawa’s finance and economic development committee hope turning over Ottawa’s ByWard and Parkdale markets to a new not-for-profit corporation will inject new life into the markets.

In a unanimous vote Tuesday, committee members approved a revitalization plan that includes creating a public plaza on George Street, in front of the ByWard Market building.

The proposed creation of a municipal services corporation means city staff would no longer oversee the day-to-day operations of both markets, a change Rideau-Vanier ward Coun. Mathieu Fleury welcomes.

Fleury, whose ward includes the ByWard Market, said last year he tried to launch a Thursday night market, only to discover the process required six weeks before approval could be given.

“We have great staff who are currently managing the markets, but they’re restricted by city bylaws. We want that not-for-profit to be entrepreneurial,” he said. 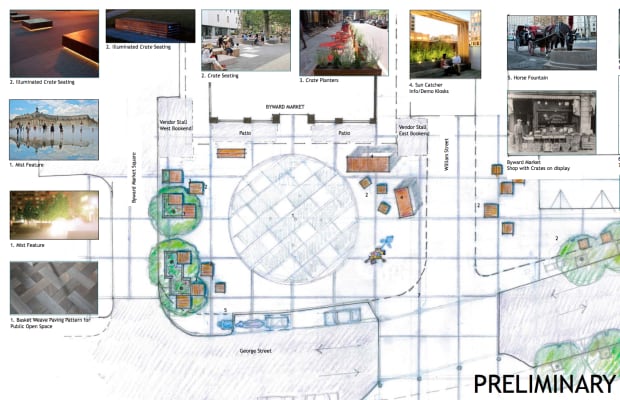 A renovated George Street Plaza figures prominently in plans by the City of Ottawa to revitalize the ByWard Market. (studio Red/City of Ottawa)

Corporation’s board would report to city

If approved by council the city would still own the ByWard and Parkdale markets, and council would approve the new corporation’s board of directors, which would report annually back to council.

Jo Riding, a spokesperson for the ByWard Market Standholders Association, addressed councillors during the meeting Tuesday to tell them her 100 members fully support giving control to a not-for-profit. 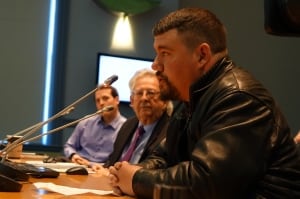 “It’ll get rid of some of the red tape. They’ve prescribed how many types of vendors can be in each specific spot, and who can live beside each other and who can’t … so it does get a little nutty,” Riding said.

Robert Hupe, who owns and operates a maple syrup stand in the ByWard Market, urged councillors to approve the plan in the hopes of making both the Parkdale and ByWard markets more viable for local growers.

Some vendors stock up to 40 per cent of their stall with produce they’ve purchased elsewhere, often from a distributor, and are selling it right next to farmers who have grown all their stock, Hupe said, allowing vendors who are re-selling produce to undercut growers.

“I would recommend they do one area for farmers, and one area for free sellers. Right now they’re side by side, and I think it confuses people. You have to bring back the farmers,” he said.

The plan to revitalize the ByWard Market also includes building a public plaza on the north side of George Street, between William Street and ByWard Market Square.

The plaza would include permanent vendor stalls, a misting feature from the ground and lighted seating areas.

At an estimated cost of $1 million, Fleury said it’s worth the investment, given that the plaza would become a gateway to the ByWard Market once the city’s light rail system is running in 2018 and passengers are getting off at the Rideau station.

“It’s a showcase piece. People who have visited Europe know how these plazas can be people spaces, and I think that’s important,” he said.