News
Home›News›‘Ottawa’ ‘Canada is all of us’: Ailing MP Mauril Bélanger Makes Case for Change to Canada

‘Ottawa’ ‘Canada is all of us’: Ailing MP Mauril Bélanger Makes Case for Change to Canada

Mauril Bélanger, the Ottawa-area MP diagnosed with ALS last fall, received a warm welcome when he appeared on the floor of the House of Commons Friday for second reading of his bill to make the national anthem gender-neutral.

But the standing ovation he received when he was called upon to speak didn’t translate into unanimous support for his proposed change to O Canada.

Bélanger’s private members’ bill would change a line in the English version of the anthem from “in all thy sons command” to “in all of us command.”

Bélanger has lost the ability to speak since his amyotrophic lateral sclerosis (ALS) diagnosis — also known as Lou Gehrig’s disease — and is using Speak Selection, an app on his iPad that reads out text.

“Changing only two words … gives Canada an inclusive anthem that respects who we were and what we have become as a country,” he said via the device. 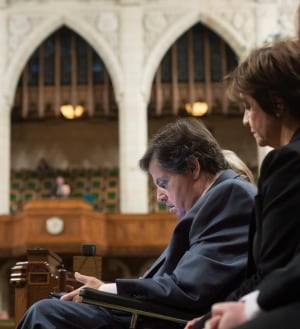 Mauril Belanger used a tablet with a text-to-speech program to make his remarks in the House, having lost the use of his voice. (Adrian Wyld/Canadian Press)

“As Canadians, we continually test our assumptions, and indeed our symbols, for their suitability,” he said. “Our anthem can reflect our roots and our growth.”

He drew a comparison to the debate over changing Canada’s flag in the sixties.

Bélanger told the Commons that the national anthem has been changed before. Its original English lyrics were gender-neutral, he said: “thou dost in us command.”

“Canada is all of us, not some of us,” he told MPs gathered around to hear his words.

He said the song’s reference to “sons” was added in 1913, prior to World War One, when the assumption of the day was that only sons would be in battle. In fact, both sexes served, he said.

Bélanger sat in a wheelchair, in the accessible location on the Commons floor normally used by Veterans Affairs Minister Kent Hehr.

Minister and medical doctor Carolyn Bennett sat to his right, with an assistant helping him with his device on his left.

Bélanger said he was looking forward to a non-partisan debate. He smiled and gave a thumbs-up sign as MPs gave him a second standing ovation at the end of his remarks.

More MPs were present than is typical for debate on a private member’s bill on a Friday afternoon.