If the threats of climate change, a pandemic or nuclear war haven’t given you enough to worry about, how about solar weather?

Large-scale eruptions on the surface of the sun can create solar-particle waves that damage satellites and disrupt power grids — not to mention the GPS in your car. 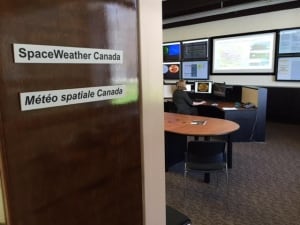 Canadian Space Weather Forecast Centre at Natural Resources Canada are testing for the potential of a solar flare hitting the earth. (Steve Fischer/CBC)

Scientists at the Canadian Space Weather Forecast Centre are now preparing for the next big event.

At their command centre near the Mer Bleue Conservation Area in Ottawa, scientists are using an array of highly specialized instruments to test for geomagnetic activity.

Heightened levels are an indicator of solar flares and their evil twin, Coronal Mass Ejections or CMEs.

CMEs are massive eruptions on the surface of the sun that send a tsunami of particles into the solar system — and can dramatically change the earth’s magnetic field once they arrive here.

Fortunately, a CME in 2012 missed earth but others have hit here with disastrous effects.

The biggest CME on record to strike our planet came in August 1859, creating an aurora so bright you could read a newspaper by it at night across much of North America.

Within minutes the event caused extensive damage to the telegraph system, the only large scale telecommunications network at the time.

Now our dependence on electricity and satellite-based navigation systems make the world, and Canada much more vulnerable to CMEs.

Canada would likely feel the impact of a large scale event more than any other country because of its proximity to the North Pole, scientists say. 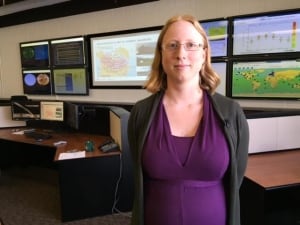 “It could also impact compass use for directional drilling, aero-magnetic surveys and, of course, power systems and pipelines, as well.”

Power lines are especially vulnerable because they act as long conductors during geomagnetic storms, causing unexpected electric currents along the line.

A solar storm in 1989, lasting only a minute and a half, caused the entire Hydro-Quebec power grid to collapse.

The resulting blackout left more than six million people in Quebec and the northeastern United States without power for nine hours.

Some electronics not affected

If there’s a saving grace, scientist say it’s that a big solar storm is not expected to have any effect on the electronics in your home or on your phone.

“It doesn’t affect all electrical systems. Only the systems with the very long wires, such as in a power transmission network, are affected,” said to Natural Resources Canada’s David Boteler. “So electronics at home and the normal wiring systems, they are not affected.”

Scientists are working to mitigate the effects of space weather by building satellites with more robust protection against solar particles and trying to find ways to better predict CMEs.

They also say the effects on most network systems of a large event will be relatively short-lived, since the solar storm should pass by earth in a day or two.