Kayakers, canoeists and stand up paddleboarders in Ottawa will soon have access to two new launch points on the Rideau Canal.

Ottawa Centre MP Catherine McKenna, whose environment and climate change portfolio makes her the minister responsible for Parks Canada, made the announcement after portaging a canoe to the site of the first dock at Patterson Creek in the Glebe.

“It’s a way of celebrating the natural beauty that we have here in Ottawa,” said McKenna.

The second dock will be installed on the east side of the canal at Clegg Street in Old Ottawa East. 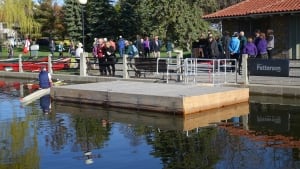 A dock for paddlers at Patterson Creek in the Glebe will be operated as a pilot project by Parks Canada from May 20 to October 10. A second dock will be located at Clegg Street on the east side of the Rideau Canal. (Giacomo Panico/CBC)

Both docks are expected to be available for public use on May 20, and will be operated this summer as pilot projects until Thanksgiving Day on Oct. 10.

“If it goes well, then we may be able to have other access points, which I think would be really exciting.”

Representatives from nearby community associations were on hand for Tuesday’s launch, including Phyllis Odenbach-Sutton, president of the Ottawa East Community Association, which has lobbied for years for the new access points.

She described the effort needed to launch a canoe over the Rideau Canal railing: “Throw it over, straight up, straight down, climb very precariously over or through the railings. To actually be able to go to a dock and launch will be wonderful.”

Odenbach-Sutton and her counterpart at the Glebe Community Association, Christine McAllister, took advantage of the new dock at Patterson to launch a canoe and join McKenna in a flotilla travelling to downtown Ottawa.

The government says the new paddle docks are part of a series of infrastructure investments along the length of the Rideau Canal, between Ottawa and Kingston, totalling $57 million.

The money will be spent to repair and rehabilitate bridges, locks, dams and visitor facilities.

“By Parks Canada’s own assessment, some of it’s in not very good shape, it’s in poor condition, it needs attention right away,” said Hunter McGill, chair of the board of the volunteer group Friends of the Rideau.

“It’s a very good start. It’s a really impressive commitment by the government, by the minister, to restoring, renovating and protecting this heritage structure.”