Students and other temporary workers employed in the federal public service say they’ve been enduring payday headaches for more than a year, predating recent problems with the government’s new automated payroll system.

The government rolled out the new pay system, called Phoenix, last winter. It’s come under criticism recently by workers and unions for either failing to pay bureaucrats properly, or not paying them at all.

But for many short-term employees, as well as workers on parental leave, the glitches are old news.

CBC has talked to employees from Health Canada, the Department of National Defence, Fisheries and Oceans Canada and Global Affairs Canada, where some workers said there have been problems since this time last year.

“The problem is actually much bigger than Phoenix and is an issue contract employees without union representation have been dealing with long before Phoenix,” said one term worker who asked not to be named for fear of not having her contract renewed.

Many university students are recruited to work in federal departments for the spring and summer or on co-op placements. One student said she had not been paid in 16 weeks. Another student who worked for the Department of National Defence last summer told CBC he didn’t get paid until long after his contract had ended.

‘I agree that 16 weeks was not acceptable.’
– Brigitte Fortin, Public Services and Procurement Canada

“I agree that 16 weeks was not acceptable,” said Brigitte Fortin, assistant deputy minister of accounting, banking and compensation at Public Services and Procurement Canada.

Fortin said the Phoenix system was implemented to streamline and update a 40-year-old pay system.

“The old pay system was very manual … and cumbersome. It takes some time for people to learn the new system and get accustomed to the new processes, but over time we’ll definitely see improvements,” Fortin said.

“In terms of casuals, students, all those people being hired, workers at Parks Canada … the fact the pay centre has a turnaround time of 24 hours for the new system we believe this summer will definitely see an improvement.”

Unions have complained that the pay centre, based in Miramichi, N.B., was not properly staffed as the new system came online last year, and say the implementation has been rushed. 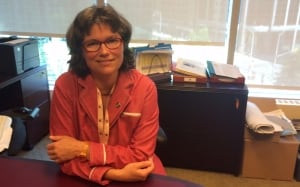 Emmanuelle Tremblay, president of the Canadian Association of Professional Employees, says students and term workers are “the worst victims” of the troubled payment system. (Chloe Fedio/CBC)

The head of the Canadian Association of Professional Employees, Emmanuelle Tremblay, said students and term workers — employees who often aren’t represented by unions — have been “the worst victims.”

“I still feel that Public Services and Procurement didn’t listen to a lot of warning signs from the unions to wait for the rollout for the second wave, to give the people in Miramichi time to breathe a little and to absorb the number of new files they’ve been transferred. I think this is just them just wanting to rush through,” said Tremblay.

Fortin said further improvements are coming to the pay system in June, and promised ” more efficiency over the next few years.”