The Quebec government says cycling will be safer from now on, thanks to a proposed bill aimed at increasing bike safety on the province’s streets and roads.

One of the measures includes much stricter fines for drivers who “door” cyclists – the common way to describe when someone opens the door of a stopped vehicle without shoulder-checking and hits a passing cyclist.

That’s compared to the current $30.

“It’s very good for cyclists,” Jolicoeur said. “It’s something we’ve been asking for for almost 10 years, and to see these introduced into law – we are very glad about that.”

Quebec’s coroner’s office recommended in 2013 that harsher fines be imposed for drivers who fail to check before opening their doors, after investigating the deaths of three cyclists from dooring.

The coroner’s office had said at the time that a $30 fine was far too low for a mistake that could cost a life. 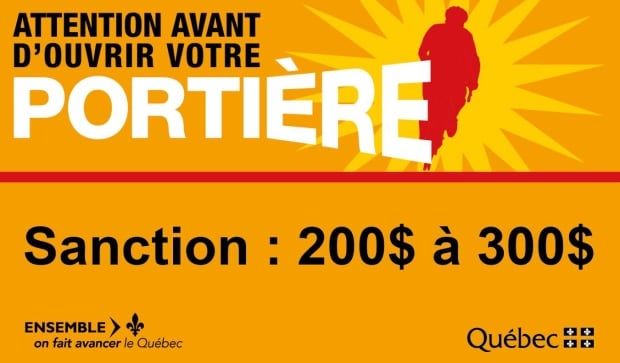 Fines for ‘dooring’ can go as high as $300 if the bill is adopted. Right now, fines in Quebec are $30. (Quebec Transport Ministry)

The bill tabled Thursday also imposes a minimum distance that a motor vehicle must keep when passing a bicycle.

“No driver of a road vehicle may pass a bicycle within the same traffic lane unless the driver may do so safely, after reducing the vehicle’s speed and ensuring that a reasonable distance can be kept between the vehicle and the bicycle during the manœuvre,” the bill states.

A “reasonable distance” is defined as: