‘Ottawa’ Kingston Pen to Open for Public Tours this Summer

This summer, tourists will have a chance to peer inside the cells of one of Canada’s most infamous former prisons.

From mid-June until late October, the former maximum-security penitentiary in Kingston, Ont., will open its doors to public tours, tourism and government officials announced Friday morning.

Colloquially known as KP, the Kingston Penitentiary closed in 2013, after nearly 180 years in operation.

Its inmates — who have included some of the country’s most notorious convicts, like former child killer Clifford Olson and murderer and rapist Paul Bernardo — were relocated to other institutions.

The 2016 tourism project is being jointly run by the Correctional Services of Canada, the city of Kingston, and the St. Lawrence Parks Commission, which will serve as the official penitentiary tour operator.

According to a report being presented to Kingston city council next week, the Kingston Penitentiary had previously offered tours on a limited basis in 2014, as part of a fundraising campaign for Habitat for Humanity and the local United Way.

All approximately 18,000 tours that year sold out, the report said. 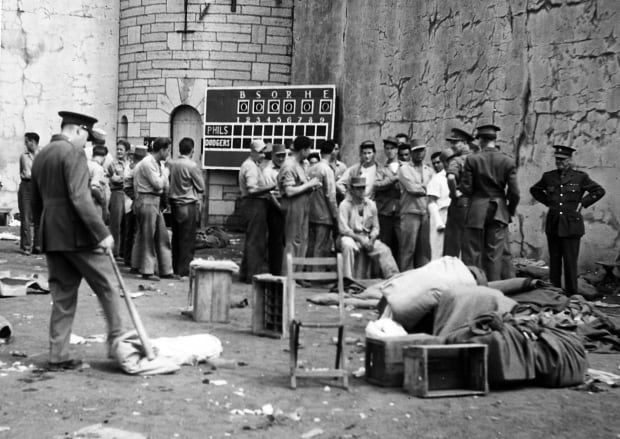 Prison guards gather inmates into a corner at Kingston Penitentiary after a two-hour riot on August. 16, 1954. (The Canadian Press)

The decision to open the penitentiary to public tours in 2016 is part of a long-term “visioning exercise” for both the former prison and the nearby Portsmouth Olympic Harbour, said Kingston Mayor Bryan Paterson.

“In my view, there’s no doubt that tourism should be an element of that, but I think there’s also opportunities to do other things with the property,” Paterson said.

“There’s always going to be tourism. It may not necessarily be exactly the way we’re going to see it this summer tourism season, but I think there’s lots of opportunity moving forward.”

Part of the proceeds from the tours will go to youth initiatives in eastern Ontario, as well as local tourism and marketing initiatives, the city said in a press release.