Ottawa is about to become the home of the biggest playground in Canada, including what’s hoped to be a Guinness World Record for the world’s longest continuous set of monkey bars.

TVO’s popular children’s television series, Giver, has partnered with the city to build the monumental playground at Mooney’s Bay Park to coincide with Canada’s 150th birthday. 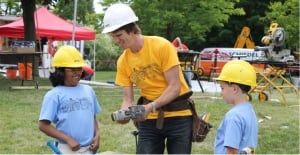 A screenshot of the TVO show Giver website. The show enlists kids and volunteers to help create play spaces.

The show will feature kids and volunteers teaming up with contractor and designer Michael Lagimodiere.

Through a series of ten episodes, they will help him build a 4,600-square-metre playground shaped like Canada.

Each province and territory will have its own unique play space. Ontario will showcase some of its most prominent buildings. Quebec’s play space will reflect Canada’s fur-trading history.

The Maritime provinces will look “nautical” and British Columbia’s will include Indigenous Peoples and the Rocky Mountains.

Giver will air on TVO as of Spring 2017. This is the 42nd playground the TVO show has built.

The city’s share of the investment will come to $1 million. The official opening is scheduled for Canada Day 2017.