The American Meteor Society received more than 330 reports of sightings around 12:50 a.m. ET.

“It was SO white and the bright light hurt my eyes,” wrote Diana Legault of Stittsville, Ont., in an email to CBC News, who called it an “amazing sight.”

Another witness in Ontario described it as a “giant ball of fire.”

Someone who saw it in Canton, Maine, said three to five minutes after it appeared in the sky, he heard and felt a loud boom that “shook the home, unlike anything I have ever experienced before.”

The event was captured on video from across northeastern North America, including Montreal’s South Shore.

He told CBC News that meteors this bright are only spotted in eastern North America about once a year. He estimates the object that caused it was likely between the size of a basketball and a shopping cart.

The fact that many people heard sonic booms suggest that it was a high-energy object that penetrated fairly deep into the atmosphere. Some videos show the object fragmenting into smaller pieces that appear to slow down. Together, those are all signs that it may have produced meteorites — fragments that could have made it to the ground. 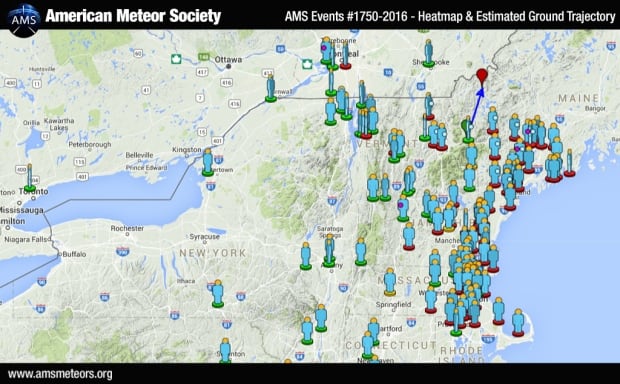 The Maine Mineral & Gem Museum is offering a $20,000 US reward if someone recovers a piece of the meteorite weighing at least a kilogram, the Associated Press reports.

A fragment that heavy would be about the size of a softball, Brown estimates.

“I would not be surprised if meteorites of that size or larger are found,” he said, adding that there are likely many fragments on the ground. However, they may not be easy to find, given that they appear to have fallen in a heavily forested area.

“From a science standpoint, if anyone can recover even milligrams of material, we can do pretty much all the analysis that would tell us what kind of object it is,” Brown said.

What makes this object special is that scientists have enough data about it from their cameras to calculate its orbit and therefore where it came from — something that is known for only about 25 meteorites on Earth.

“If people do recover this,” Brown said, “it would be like a free sample return mission to an asteroid.”

‘Ottawa’ Schizophrenia, Not Client, to Blame for ...