News
Home›News›‘Ottawa’ ‘It Feels Like There’s a Train in My Living Room’: Via Rail Tree Cutting Angers Residents

‘Ottawa’ ‘It Feels Like There’s a Train in My Living Room’: Via Rail Tree Cutting Angers Residents

The ongoing destruction of a swath of trees is upsetting dozens of residents in Eastway Gardens, but there’s little they can do to stop Via Rail workers from clearing green space in their Tremblay Road neighbourhood.

The curtain of trees provided a barrier from the trains that pass by nearly 30 townhouses on Avenues O and P — but those trees are now being removed due to a federal regulation requiring Via to deal with what a spokesperson calls “dangerous vegetation.”

Longtime Eastway Gardens resident Molly-Jo Beauchamp was hoping the workers would spare the trees that pushed up against her fence and couldn’t help but tear up when she watched a backhoe tree cutter level everything.

The birds are gone. The shade is gone. The privacy is gone. – Molly-Jo Beauchamp, Eastway Gardens resident

Beauchamp moved into her townhome on Avenue P in 2001.

She says the green space bordering her backyard was a big part of the charm of living in Eastway Gardens: the berries on the tall bushes attracted birds, and the trees provided much needed cover on a hot summer day.

“The birds are gone. The shade is gone. The privacy is gone,” said Beauchamp. “And when the trains come by now, they can look right into your home and backyard.”

Steve Stringer lives a few houses down from Beauchamp. He says Via’s clear cutting has made it impossible to ignore the passenger trains that pass by each day.

“It’s disturbing. We used to have nice green space. Now sometimes it feels like there’s a train in my living room,” Stringer said.

The loss of trees also means there’s nothing to block the bright floodlights that the City of Ottawa installed for the new LRT station it’s building on Belfast Road from shining into his home, Stringer said.

So it’s no surprise residents are concerned about property values: there are three homes on the block that are up for sale, and Stringer said his neighbours are worried they won’t get their asking price. 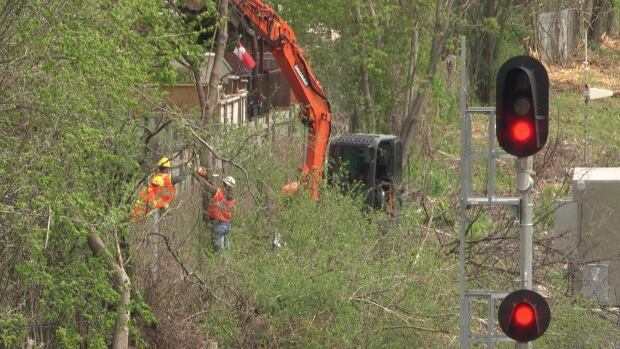 Via Rail says it must cut down the trees near Eastway Gardens to improve sightlines and make the route safer for its passenger trains. (Jean Delisle, CBC News)

New bushes to be planted

In an email, Via Rail representatitve Mariam Diaby told CBC News that the company is required by federal law to remove “dangerous vegetation.”

The overgrown brush in the area was a threat to the safety of Via trains and their passengers, Diaby wrote.

“This vegetation impairs sight lines, can cause fire, can disperse in a wind storm, bend under the weight of snow and other dangers,” she said in her email.

Once the trees are cut and the debris is removed, Via Rail will plant different bushes along the rail line that won’t grow as high or as dense, Diaby said. 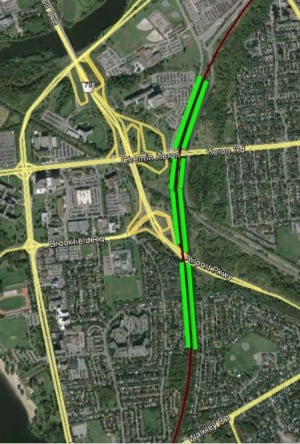 The green lines indicate where VIA Rail will be removing “dangerous vegetation.” Hundreds of homes could lose green space (VIA Rail)

As compensation for the loss of trees, Diaby said some residents were offered a pair of free business-class train tickets to be used anywhere between Windsor and Quebec City.

Via employees also offered residents garden vouchers to buy trees and bushes to plant in their own yards, she said.

“It’s almost insulting,” said the Eastway Gardens resident, explaining that she has no space in her small backyard to plant trees.

Derby said she didn’t want compensation: she wanted consultation on what trees would be cut, and what they would be replaced with.

“We would have liked to have the respect from VIA to sit down and discuss it,” she said. “We’re not ignorant of safety concerns.”

Eastway Gardens won’t be the only Ottawa community affected by Via Rail’s track maintenance work.

The company also has to clear brush for several kilometres along its Alta Vista corridor and repair railway ties in the city’s west end.

Diaby says that Via has sent out letters to more than a thousand Ottawa residents advising them about possible disruptions over the next few months.