The federal government is taking veterans back to court to try to block certain benefits for injured and wounded soldiers, despite a Liberal campaign promise to better support them after an era of Conservative cuts.

“It’s a betrayal,” said Donald Sorochan, the lawyer representing the six Afghan war veterans who initiated a class-action lawsuit over pensions and other benefits.

“They have turned the Liberal election campaign into a lie. I sat at tables [during the campaign] with some of the people who are now in cabinet. Those ministers have been turned into liars by the Department of Justice,” he said Tuesday, noting the election platform explicitly promised that no veteran would have to “fight the government” for the support and compensation they have earned.

A peace agreement of sorts reached by the previous Harper government and the veterans, the plaintiffs, expired Sunday. The two sides failed to reach an out-of-court settlement, and now government lawyers have informed the B.C. Court of Appeals that they will pick up the lawsuit where it left off.

The plaintiffs have argued in court that the government has a sacred obligation to its injured soldiers and that the lump-sum payment wounded veterans receive under the New Veterans Charter — as opposed to the pension that was previously offered to veterans before 2006 — is inadequate compensation, as they receive less money over the course of a lifetime.

They’ve also argued that it violates their rights — the right to life, liberty and security of the person — under Section 7 of the Charter of Rights and Freedoms.

“The social covenant is this promise that our country, Canada, has promised service people they will be protected when they get maimed and their families will be looked after if they are killed,” Sorochan said.

Government lawyers outraged veterans by asserting that the federal government has no extraordinary obligation to those who have fought for the country, and therefore the litigation has no merit.

The justice department lawyers tried to block the case during the Harper era by arguing that Canada does not have a social covenant with veterans, and that a “scheme providing benefits cannot be said to amount to a deprivation merely because claimant views the benefits as insufficient.” They also said that the plaintiffs “seek to advance a pure economic interest.” 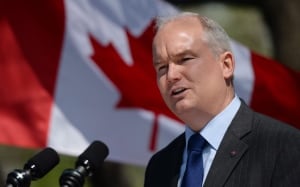 Veteran Affairs Minister Erin O’Toole makes an announcement related to the Government of Canada’s commitment to honour Canadian Veterans and war dead for their service and sacrifices at a press conference in Ottawa on Tuesday, May 12, 2015. (Sean Kilpatrick/Canadian Press)

Moreover, all parties voted unanimously in favour of a motion introduced by NDP MP Fin Donnelly last May, which recognized a “stand-alone covenant of moral, social, legal and fiduciary obligation exists between the Canadian people … and members of the Canadian Armed Forces who have been injured, disabled or died as a result of military service.”

O’Toole also removed the lead government lawyer, Paul Vickery, from the case and replaced him with Joel Watson, a litigator from the private sector and himself a former veteran.

The Liberal government has also put Vickery back on the case.

‘Charging into the valley of political death’

The plaintiffs agreed to drop their lawsuit if the government provided timetables for implementing Veterans Affairs Minister Kent Hehr’s mandate letter, which included pensions for injured veterans among other key promises.

But Hehr has so far been frustratingly noncommittal as to the schedule of some of his top priorities, Sorochan said.

“He’s personable, but I don’t think he engenders a lot of confidence that he’s going to get things done for veterans,” he said. “Usually, when you have a rookie minister, you have politically savvy minders that keep them out of trouble. He doesn’t have them.”

A spokesperson for the minister said Tuesday that Hehr “remains committed” to re-establishing lifelong pensions for veterans “and to all items in his mandate letter,” but added that because the matter is before the courts it would be inappropriate to comment further.

Now, Hehr has signed off on sending the issue back to court, Sorochan said, which is a slap in the face to veterans who sought to find a mutually agreeable resolution.

“Why are others in his caucus allowing him to retreat to a position that contributed, at least in part, to the Conservative defeat? When you’re told you’re charging into the valley of death, by me, you’d think you’d stop charging.

“We walked down that path of reconciliation and we attempted to find a solution that would be in the best interest of all parties. But, for some reason, this minister has accepted arguments by the Department of Justice that they should slam the door on it and go back to court and re-ask the court to accept arguments that had been repudiated.”

The Liberal platform in the last election explicitly promised to restore the pension benefit. “We will re-establish lifelong pensions as an option for our injured veterans, and increase the value of the disability award,” the platform reads.

The 2016 budget did allocate more than $4.6 billion over three years to boost support for veterans, namely reopening service offices, increasing the disability award and boosting the earnings loss benefit for injured veterans and expanding access to the permanent impairment allowance — but it was silent on pensions, the biggest sticking point.