Alexander Malleta won’t be taking the field for tonight’s Ottawa Champions’ season opener, but the team can’t wait until the Cuban slugger is anchoring its batting order.

The 39-year-old first baseman and designated hitter was one of two Cuban players the club snapped up during the off-season, as they aim for the playoffs in only their second Can-Am League campaign.

“I saw him play first-hand, and so I’m excited to have him here,” said Sebastien Boucher, the club’s centre fielder and hitting coach.

“If he’s still the guy he was six, seven years ago, I’m very excited.”

The Champions signed Malleta and 33-year-old third baseman Donal Duarte earlier this month while team owner Miles Wolff was in Cuba, putting the final touches on a mid-June series between the Champions and the Cuban national team.

Both players have impressive resumes in the Cuban National Series, the country’s top baseball league. 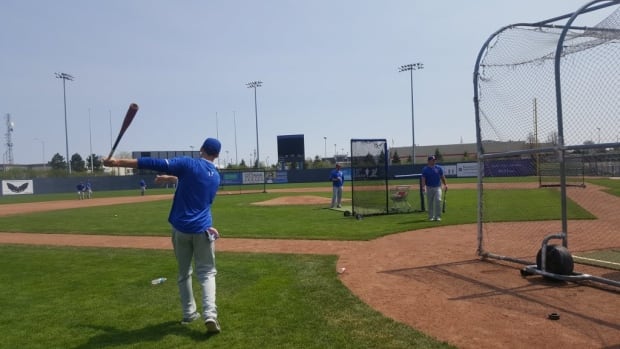 The Ottawa Champions’ second season in the Can-Am League gets underway tonight at 7 p.m. with the first of five home games against the New Jersey Jackals. (Ottawa Champions)

In his 17th season last year, Malleta hit .333 with 12 home runs and a team-leading 61 runs batted in, according to statistics website Baseball-Reference.com. Duarte, meanwhile, hit. 290 with five home runs and walked more than twice as much as he struck out.

The Cuban pro league is generally considered to be equivalent to High-A minor league baseball, similar to the Can-Am League.

Due to visa issues, neither Malleta nor Duarte will be in tonight’s lineup, although the club is hoping they’ll arrive in Ottawa by the weekend, said team president and co-owner David Gourlay.

The next step will be to get them the proper documents for road trips to the United States, Gourlay said.

“They’re going to bring a tremendous amount of respect, visibility and interest to this team and this league as well,” Gourlay told Alan Neal, host of CBC Ottawa’s All In A Day.

“Our die-hard fans love the diversity that we’re offering at the ballpark.”

Those same fans are also hoping Malleta and Duarte bring some added offence to a team that fell just short of the playoffs in its inaugural season, finishing last year in fifth place with a 46-50 record.

Boucher sounds confident they will.

“It’s hard to say how good we’re going to be, but overall — after spring training and the few additions we’ve had with the Cubans — I think we’re looking pretty sharp,” Boucher said.

The Champions kick off their 2016 season tonight at RGCT Park with the first game of a five-game homestand against the New Jersey Jackals.