Canada’s ambassador to Ireland, the man hailed as a hero for shooting Ottawa gunman Michael Zehaf-Bibeau after he stormed Parliament Hill in 2014, tackled a protester at a ceremony in Dublin Thursday morning.

Kevin Vickers, the former House of Commons sergeant-at-arms, was at the event commemorating the 100 British soldiers who died during the Easter Rising, also called the Easter Rebellion, when Irish republicans tried to overthrow British control of the country by force.

male protester, wearing an Easter Rising T-shirt, stood up during the invitation-only event and could be heard yelling, “This is an insult.”

Vickers was the first to respond to the disturbance, tackling the man and leading him away from the ceremony. Police later arrested the protester.

“This man just ran forward and started screaming, ‘It’s a disgrace.’ He was tackled by somebody and it was only after that I realized it was the Canadian ambassador,” an unnamed eyewitness told the Irish Independent.

“The whole thing lasted about a minute,” the eyewitness said. “The Canadian ambassador grabbed him. There was a struggle and gardaí [the police] wrestled him to the ground. Without hesitation, [Mr. Vickers] jumped out from the middle of dignitaries.”

Thursday’s ceremony was being held at a time of heightened security, in the centennial year of the uprising that sought to establish an Irish republic. The British MI-5 recently raised the threat level for Northern Ireland-related terrorism from moderate to substantial, adding there is a “strong possibility” of an attack from “dissident” Irish republicans. 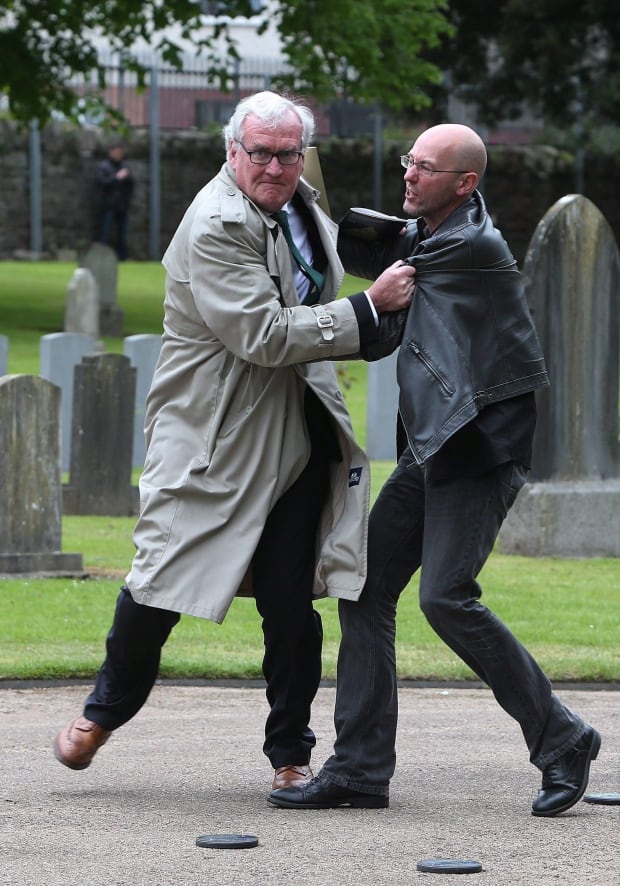 Former House of Commons sergeant-at-arms Kevin Vickers removes a protester from an event in Dublin on Thursday. (Canadian Press/PA via AP-Brian Lawless)

Prime Minister Justin Trudeau refused to wade into whether Vickers would be subject to any discipline when asked about the incident at the G7 summit in Japan.

“I’ve been very much engaged in discussions around here and I’m not fully apprised on all the details of that particular incident and will not be commenting on it,” he said.

When pressed further, Trudeau said “if it lands on my table, I’ll take a look at it.”

The protester was identified as Brian Murphy by the Irish Republican Prisoners Welfare Association (IRPWA), of which he is a member. The group, which claims it is not aligned with any political party, is a support group for the families of imprisoned republicans.

In a Facebook post, the group chided Vickers for what it called his “assault” on their member. Murphy can be seen wearing the IRPWA logo across his chest.

As the protester was being handcuffed by police, attendees at the ceremony were hearing these words from the speaker at the podium, quoting from the Irish government’s foreword to the Ireland 2016 centenary program.

“All lives are equal in value, and 2016 must be a year in which the narratives of everyone on this island of Ireland are included and heard. This is how we can truly honour the vision of the 1916 proclamation (of the Irish Republic).”

A spokesperson for Global Affairs Canada said in a statement that Vickers intervened to intercept the protester from running up to the speakers’ podium. He was not injured during the incident, the department confirmed. The Canadian Embassy in Ireland would not comment.

“We were all kind of surprised, to put it mildly, that a dignitary kind of beat the Irish police in wrestling this guy to the ground,” Colin Keegan, a photographer covering the event, told Vanessa Vander Valk, host of CBC Radio’s Shift.

“I have to hand it to him. It was impressive … he was in action within a split second of it happening.”

But Keegan said Murphy, the protester, seemed more disgruntled than a security risk.

“I wouldn’t say it was threatening, really, it was more disruptive than threatening. He didn’t lunge at anybody, or he didn’t have a weapon. I presume the gentleman was just disgusted that we were commemorating the death of British soldiers on Irish soil.” 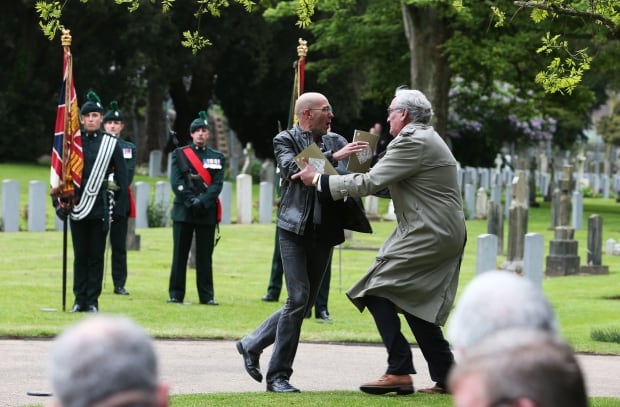 Global Affairs Canada has a code of conduct for its diplomatic staff abroad, last updated in 2014.

Under a broad heading of “Canada’s reputation: Personal behaviour,” it notes in part: “Regardless of any legal immunity conferred upon representatives abroad, their conduct and actions will be subject to a greater degree of scrutiny and public interest than they would be at home.

“The potential for public scrutiny requires that representatives use good judgment and common sense.”

Vickers was representing Canada at the ceremony as a guest of the Irish Minister for Foreign Affairs and Trade Charles Flanagan.

He was appointed ambassador to Ireland early last year, just months after he played a key role in ending the shooting attack on Parliament Hill.

Gunman Michael Zehaf-Bibeau shot and killed 24-year-old Cpl. Nathan Cirillo at the National War Memorial on Oct. 22, 2014, then entered the halls of Centre Block and continued shooting, as security staff and frightened parliamentarians raced through corridors. Vickers was lauded for his efforts in halting the attacker.