Windmill Developments says it is free to start work on Chaudiè​re and Albert islands on the Ottawa River after overcoming what it sees as the last legal challenge to its Zibi project.

Architect Douglas Cardinal tried to get a hearing at the Ontario Municipal Board to challenge the City of Ottawa’s 2014 rezoning of the former industrial site, and wanted to argue that the site is sacred to First Nations people.

The OMB dismissed that request last November. Cardinal’s next step was to ask for an appeal in the courts, but on Thursday that also failed when judge Charles Hackland released a decision saying the OMB made no legal mistakes.

“Underlying the Board’s decision is the correct premise that it is not the Board’s function to adjudicate issues of Aboriginal title, or to declare or recognize the lands in question as a sacred site to the Algonquins, other than in the context of the duty to consult,” wrote Hackland.

“Our zoning is in effect so that’s the exciting news,” said Rodney Wilts, a partner in Windmill Developments, which proposes to build an environmentally-conscious community that straddles Ontario and Quebec.

“Now we have full go-ahead to start work on the site.”

Wilts considered Cardinal’s bid to get an appeal in the courts as the last big hurdle that could slow the company’s progress on the islands.

The sales centre has been open for nearly a year and Wilts said approximately one hundred units have been sold in the first two sets of condominiums — one in Ottawa, one in Gatineau — it has put on the market. 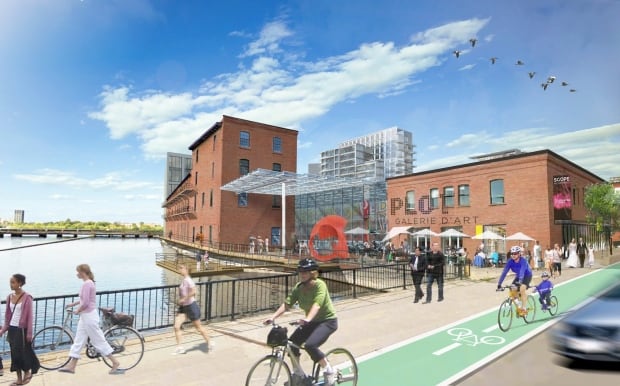 An artist’s rendering of Albert Island, part of the “Zibi” development. It’s part of a plan for a major new residential and commercial development that will revitalize 37 acres of prime land. (Build Green Solutions)

The zoning on its Gatineau lands was already in effect, but the company had been disclosing to buyers that legal challenges remained on the Ottawa side, said Wilts.

“We were always very confident we were going to get a favourable ruling but actually getting it in our hands was an exciting milestone.”

Windmill will start the big job of decontaminating the soil on the former pulp and paper site, and start construction by the fall, he said.

Douglas Cardinal has threatened in the past to stand in front of bulldozers if it came to that, and after Thursday’s decision his lawyer said to expect more opposition to Windmill’s plans.

When it comes to the zoning of the site, Michael Swinwood said the “western paradigm” doesn’t allow for hearing about the broader context of the site and its history.

“It’s not your regular planning issue. There’s a valid claim of the sacredness of this territory on behalf of the Algonquins,” he said.

While Windmill sees an end to its legal challenges, Swinwood said he would be speaking with Cardinal about what to do next.

“It’s not over,” said Swinwood. 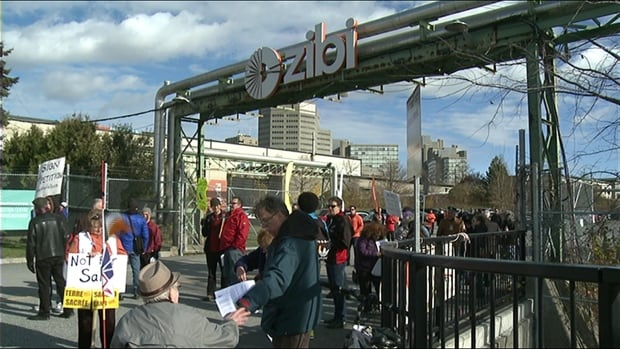 About two dozen protesters carried placards outside the sales centre of the proposed Zibi development in November, which would be built on two islands considered sacred to First Nations people. (CBC Ottawa)