Premier Kathleen Wynne has officially apologized to Ontario’s Indigenous communities for the decades of mistreatment of First Nations, Métis and Inuit people.

Wynne gave the province’s official response to last year’s 381-page report from the Truth and Reconciliation Commission on the abuses suffered by residents in Indigenous communities. The report found that children were physically and sexually abused and died in numbers that would not have been tolerated in any school system.

Wynne said Ontario wants to acknowledge “one of the most shameful chapters in Canadian history,” and said the province will teach a new generation of students the truth about our shared history.

She said residential schools set out to “take the Indian out of the child” by removing them from their homes and systematically stripping them of their languages, cultures laws and rights.

Ontario will spend $250 million over three years to help people understand the legacy of residential schools and to create what Wynne calls a culturally relevant and responsible justice system.

That investment will go toward 26 new initiatives as part of the release of a new report called “The Journey Together.”

“Today, Ontario commits to working in partnership with Indigenous leaders and their communities to undertake 26 new initiatives that will help build trust and respect into our relationships, and build opportunity and security into the lives of Indigenous people,” said Wynne in the Ontario Legislature Monday morning.

Wynne was joined at the news conference by Opposition Progressive Conservative Leader Patrick Brown, Ontario NDP Leader Andrea Horwath and Indigenous leaders on Monday morning in Toronto. Brown and Horwath also apologized on behalf of their parties and the people of Ontario.

Wynne also said her government will introduce legislation Monday to name the first week of November “Treaties Recognition Week,” and the Ministry of Aboriginal Affairs will be renamed Ministry of Indigenous Relations and Reconciliation.

“Today we reclaim our rightful place in Ontario,” said Day. 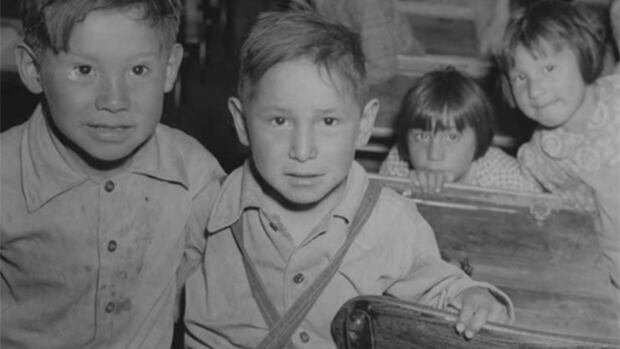 The final report of the Truth and Reconciliation Commission says that over 3,200 Indigenous children who were put in residential schools never returned home. Nearly a dozen died while trying to escape. (United Church of Canada Archives)

The Truth and Reconciliation Commission’s report, “Honouring the Truth, Reconciling for the Future,” was released in December. It marked the culmination of thousands of hours of heart-wrenching testimony heard in more than 300 communities over six years.

More than 6,000 Indigenous women and men who were abused at residential schools told their stories during the hearings.

Earlier Monday, a sunrise ceremony was led by Indigenous elders Shelley Charles and Jim Dumont, along with a workshop open to the public focusing on the “history of the relationship between European settlers and Indigenous Peoples in Canada.”

The Truth and Reconciliation Commission heard stories of children forcibly separated from their families, communities, language and culture who ended up suffering shocking rates of mental, physical and sexual abuse.

“Removed from their families and home communities, seven generations of Aboriginal children were denied their identity through a systematic and concerted effort to extinguish their culture, language and spirit,” commission chair Justice Murray Sinclair said in the final report.

In February, Ontario announced it would be introducing mandatory Indigenous cultural sensitivity and anti-racism training for all public service employees in response to recommendations from the commission.

The province also announced it would develop a plan to ensure that the effect of residential schools, the history of colonization and the importance of treaties are added to the curriculum in Ontario’s public schools.

‘I had to fight back tears’

For residential school survivors who attended the announcement, Wynne’s apology was welcomed as a step forward in the long road to reconciliation.

“Today, it was beautiful to sit in there and watch what went on,” said Shirley Roach of the Garden River First Nation.

Roach, who was taken by the RCMP and sent to the Shingwauk residential school in Sault Ste. Marie when she was seven years old, contrasted Wynne’s apology with former prime minister Stephen Harper’s.

“There was an apology before … from Harper. We watched it at Shingwauk, and to me it did not mean anything,” said Roach. “There was no feeling, no nothing with that. This morning it meant something to me when Kathleen Wynne made that apology to us. There was some feeling there when she was apologizing to us as survivors. We can see if you’re real or if you’re not real, if you’re sincere or not.”

“I had to fight back tears,” she said. “Today marks a change in our future.” 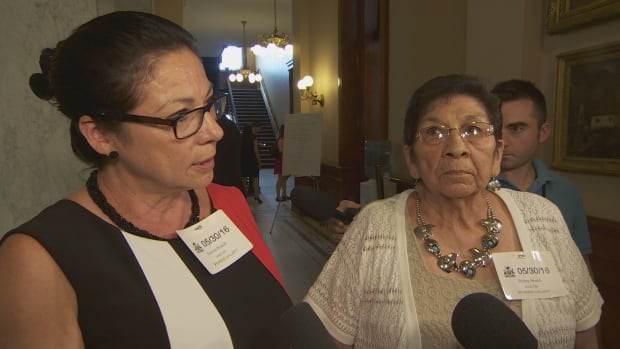 Shirley Roach, right, and her daughter, Dianne, welcomed Kathleen Wynne’s apology as a ‘change in our future.’ (CBC)

Although the apology was welcomed, survivors said much is still needed in order to achieve reconciliation.

“I heard somebody say, ‘We want to forgive you for what happened, for all the policies and for all the suffering and pain that we endured as children, but … you better show us a good reason,'” said Edmund Metatawabin, who as a seven-year-old was sent to a residential school in 1956 until 1963.

“And there are several reasons, in terms of momentum, in terms of changes in policy and words and action within the house and in the province. When we start to see these things, I think we can start to think about forgiveness,” he added.

“It took over a hundred years to get us to where we are today,” she said. “So I think it will take that long … because there is still so much discrimination out there against us as Aboriginal peoples.

“They don’t know residential schools are part of Canada. Educating the rest of Canada, starting from elementary up to post-secondary, you’ll get more empathy.”