Ongoing pay glitches inside the federal government are not only causing financial difficulties for some workers, Canada’s largest public service union says not paying employees is actually illegal.

“The federal government can’t pay its employees. That breaks every kind of code in the book,” said Chris Aylward, vice president of the Public Service Alliance of Canada.

“The PSAC has explored legal avenues, because we have to. Our members are enduring financial hardship because of this Phoenix system.”

The government’s pay system has caused issues for some workers for more than a year and the switch to the new Phoenix automated payroll program this winter has caused further complications.

Not paying workers is a violation under Canada Labour Code.

If there was anyone in management that this was happening to, the issue would be resolved by the end of the day, everybody knows that.
– Melissa Della Porta, public servant

Over the past couple months, several federal employees — many of them casual, temporary, students or full-time workers on maternity leave — have reached out to CBC after experiencing problems with their pay.

“We’re still hearing the same issues, people are not being paid on time and they’re not being paid accurately. We’re now hearing stories of employees of the federal government who can’t put food on the table,” said Aylward. 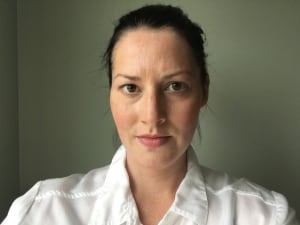 Melissa Della Porta, a correctional officer in Edmonton, said she isn’t being properly paid by the Phoenix system. (Della Porta)

Melissa Della Porta, a correctional officer at the Edmonton Institution prison, hasn’t been properly paid since before she returned from maternity leave in April.

‘Nobody cares to work this out’

Della Porta has gone up the chain to the regional deputy commissioner at Correctional Services Canada who told her he was aware of the issues, but could not fix the problem.

“It’s the bottom-line workers here who are being affected,” said Della Porta. “If there was anyone in management that this was happening to, the issue would be resolved by the end of the day, everybody knows that. It’s too bad that nobody cares to work this out.”

For months, Della Porta’s pay has either been late or a lower amount than what she is owed. But she said others are worse off, including co-workers who are on maternity or parental leave and haven’t been paid at all.

“Even for me, just getting paid late, all your bills are scheduled around your pay day, that’s just how it works. I’ve had payments bounce already. Just last week I had payments bounce. Do you think they’re going to pick of the tab for [insufficient funds]? No,” said Della Porta.

Public Services and Procurement Canada oversees the federal pay system, but it has been pointing the finger at other departments for not inputting the correct paper work as a cause for the pay glitches.

In a statement to CBC, Public Services and Procurement said it continues to work with those other departments to make sure data is appropriately entered into the pay system.

The department said some recent measures include:

Regardless of these recent measures, PSAC is calling for the government to shut down the Phoenix system and go back to the old system until the glitches have been completely fixed.

“Ultimately, in our opinion, it’s Public Services and Procurement, minister Judy Foote who’s the Receiver General of Canada, who is responsible to make sure employees of the government get paid properly,” said Aylward.

CBC has spoken to university students working for the federal government who have gone unpaid for several weeks. Some worked in the public service last summer and suffered through the same issues.

“Students in some departments have been told when they were hired back in April, don’t expect a pay check until July. You tell me, I’m going to work for the federal government and I’m not going to get paid for three months? That’s totally unacceptable,” said Aylward.

“Up north in Nunavut, where four litres of milk costs $12 and they’re not being paid, one person got a promotion from one level to the next. The difference in that promotion was $23. That’s what she received as a pay cheque, $23. Another employee with immigration, in Vegreville, Alb., was overpaid by $17,000.”