The City of Ottawa wants to start studying the route and costs of taking light rail out to Kanata many years earlier than planned so it can start pursuing the federal and provincial governments to fund that extension.

The idea would be to take the tracks out to Palladium Drive from Bayshore, which should be the western terminus by 2023.

A rapid bus route would extend to the many high-tech businesses in Kanata North.

An environmental assessment to lay that ground work could begin in January 2017, municipal and federal politicians announced Wednesday at the Terry Fox Transitway station.

Kanata South councillor Allan Hubley blew a wooden train whistle at the announcement, thrilled the plans were being sped up.

“The transportation master plan said we won’t even look at this until 2031,” said Hubley, who called on city staff a year ago to look into the feasibility of making that happen sooner.

“I can now believe I will ride a train in my lifetime from Kanata. And that’s an exciting feeling,” he said.

High-tech companies and other businesses have been quietly pushing to speed up Kanata’s light rail plans for a few years now, mostly because they struggle to attract talented people who want a downtown, car-free lifestyle.

“Currently our bus routes through the tech park are not terrific. Quite honestly, they’re horrible,” said Jenna Sudds, executive director of the Kanata North Business Association, which counts large companies like Nokia and Ericsson among its members. 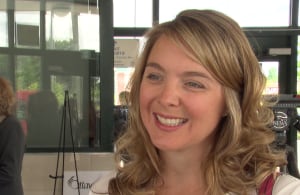 Jenna Sudds heads the Kanata North BIA, which includes many of the big high-tech employers in the technology business park along March Road. (CBC)

“There’s thousands of great jobs in the tech park, so it’s that balance of whether they want to spend that hour and a half to get there.”

Until this morning’s announcement, the companies felt overlooked, said Sudds.

The federal government has yet to even make an announcement to contribute $1 billion to the city’s second phase of light rail, let alone a Kanata extension.

But the Liberal MP for Kanata-Carleton, Karen McCrimmon, said she doesn’t believe the city is angling for too large a piece of federal infrastructure funding.

“There’s a recognition that the GDP that comes out of this technology hub here in Ottawa…is significant for the country,” she said.

The proposal to start the Kanata light rail environmental assessment early would need to be considered by transportation committee this fall, and approved by full council.

Watson sees the study starting in January 2017 and taking two years to complete. The assessment would determine when construction could begin and if it needs to be done in stages.

With federal and provincial governments investing in transit and infrastructure, the mayor said it is time to do its homework so it can “strike while the iron’s hot” and try to keep crews working beyond the opening of the second phase of light rail in 2023.

“​It gives us a lot more bargaining effort to actually go to our other partners to say ‘We have a plan. Here it is. Here’s the cost. Let’s talk dollars and let’s get shovels in the ground,” said Watson. 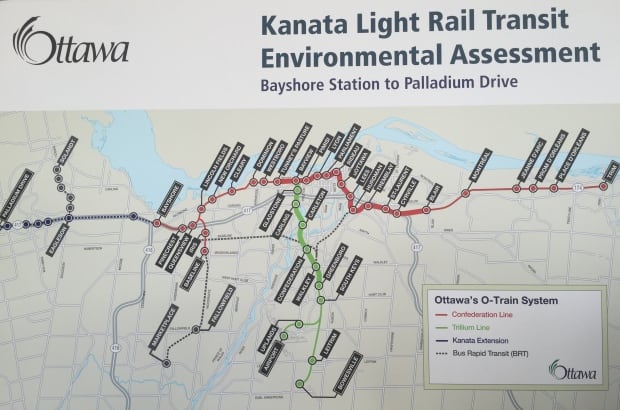 An environmental assessment would look at the route and costs of taking light rail west from Bayshore, which is due to open in 2023, and out to Palladium Drive. A rapid bus line would extend to the high-tech companies in the Kanata North business park. (City of Ottawa)