‘Ottawa’ Rideau Street Sinkhole: What You Need to Know to Navigate Ottawa’s Core

A large sinkhole formed next to a construction trench on Rideau Street Wednesday morning, forcing the evacuation of the Rideau Centre and surrounding businesses, as well as the closure of roads.

No injuries were reported, according to the City of Ottawa.

Many bus routes that are scheduled to stop on Rideau Street have been rerouted to the busy Mackenzie King Bridge.

Rideau Street has been shut down eastbound between Elgin and Dalhousie streets, westbound from Sussex Drive to Dalhousie Street.

Northbound Elgin Street has also been shut down from Rideau to Albert streets, and Sussex Drive has been closed from Rideau to George streets. Mackenzie King bridge is open to buses and pedestrians.

The City of Ottawa posted on Twitter just before 3 p.m. that drivers should move their vehicles from key downtown streets — and that vehicles parked there would be towed as early as 3:30 p.m.

The tow away zone applies to O’Connor Street from Wellington Street to Highway 417, the west side of Elgin Street from Laurier Avenue to Catherine Street, and Daly Avenue from Waller Street to King Edward Avenue.

Some of those spots are no parking or no stopping zones after 3:30 p.m., and vehicles parked there are usually subject to tickets.

It’s unclear how long the road closures and bus detours will continue.

By Wednesday evening, the sinkhole was being filled with special cement meant to prevent further collapse.

The City of Ottawa said buildings near the sinkhole were evacuated due to the smell of gas, and that water service was also disrupted. Both the gas leak and the watermain break have since been contained, the city said.

The city said that the environmental services department is “addressing water and sanitation services,” while Ottawa Public Health is “monitoring overall water quality and general impacts on public health.”

The Rideau Centre itself, a hub for commuters and home to some 150 businesses, was evacuated after the street outside collapsed and will remain closed for the rest of Wednesday. The Shaw Centre and the Westin Hotel, which are attached to the mall, were also evacuated.

The Westin reopened to guests on Wednesday afternoon but employees warned the hotel had no hot water.

“This evening, the hotel will be unable to provide hot water in our guest rooms as a result of the unforeseen emergency,” hotel general manager Ross Meredith told CBC News in an email. “We apologize about the inconvenience this may cause you.”

Hydro Ottawa said that as 5 p.m. seven buildings were still without power. 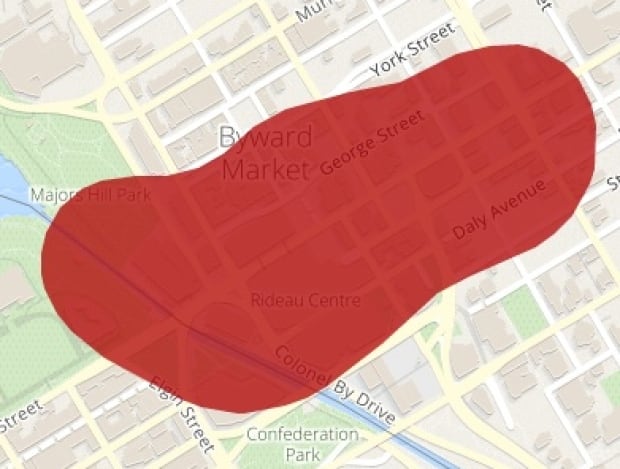