Hani Al-Nuaimi arrived in Ottawa 11 months ago from Syria, where he worked as a plumber for 20 years. Since arriving, he’s been taking English courses, but hasn’t worked. 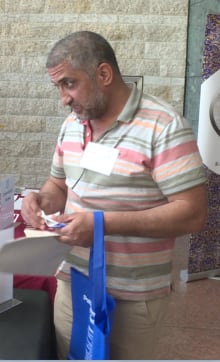 Hani Al-Nuaimi, a Syrian refugee, worked for 20 years as a plumber before coming to Canada 11 months ago. (CBC)

Al-Nuaimi said he’s grateful for the financial support he’s received since his arrival, but now with federal resettlement money about to run out and the prospect of having to collect welfare looming, he’s anxious to find a job.

“Welfare give me this money … no good,” Al-Nuaimi said.

Coun. Michael Qaqish, the city’s refugee liaison, believes many of the refugees at the job fair have skills that are in demand.

“We’re really hoping that some people leave with not just a connection but an actual job opportunity today,” Qaqish said.

Other refugees who attended the job fair said their skills ranged from engineering to medicine, but it’s unlikely they’ll find work in their chosen fields because they lack Canadian credentials.

“It can lead to frustration [and] depression for a lot of people coming down here,” said John Pezoulas from job placement company Labor Ready, who attended the job fair. “It’s a lengthy process. It’s not cheap either. They have to take courses to get up to par.”

Deadline looming for many refugees

So far about 1,600 Syrian refugees have settled in Ottawa. Qaqish acknowledged the pressure’s on to help them begin supporting themselves.

‘We’re really hoping that some people leave with not just a connection but an actual job opportunity today.’ – Coun. Michael Qaqish

“Our biggest challenge, our biggest concern is month 13 … because then they go on to provincial assistance which is administered by the city, and that’s something we are going to try to avoid.”

Representatives from the retail sector and hotel industry were recruiting at the job fair alongside several temporary employment agencies.

The Westin Hotel’s Denise Fishwick said she hoped to hire several people for entry-level positions in the hotel’s housekeeping department.

Another 2,000 Syrians are expected to settle in Ottawa in the coming months, meaning the hunt for jobs won’t be getting any easier for those already here.