An Ottawa man has been found guilty on nine charges related to a brazen Boxing Day shooting two years ago at a Kanata shopping centre.

Yaqoub Ali, 27, was convicted Thursday in the Dec. 26, 2014 shooting at the Tanger Outlets mall — a violent bout of gunplay that Ottawa police originally chalked up to gang “infighting.”

The victim, then 22-year-old Adel Al-Enzi, was shot once in the foot with a handgun.

According to facts of the case provided to CBC News Thursday by Crown Attorney Peter Napier, Al-Enzi had been waiting in line at the Polo Ralph Lauren Factory Store with his brother and another man at around 3:30 p.m. when Ali and another man walked up to them.

Toddlers, children and teenagers nearby

The conversation between Al-Enzi and Ali grew heated, Napier said. Once outside the store Ali pointed a gun at Al-Enzi’s face before shooting him in his right foot.

Ali then fled the mall, Napier said. He was later arrested in the city’s Vanier neighbourhood.

The court heard that Al-Enzi refused to provide a statement to police. 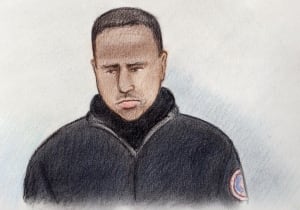 Surveillance camera footage entered as evidence during the trial showed the shooting happened on “one of the busiest days of the year,” Napier said, with toddlers, children and teenagers all nearby.

The nine charges Ali was convicted of Thursday include:

He is scheduled to be sentenced on Aug. 30.