Ottawa wants to change the face of its police force to be more inclusive, but it’s competing with the OPP and other police services for women, racial minorities and Indigenous officers.

“We are short,” said Ottawa police Chief Charles Bordeleau. “We are not truly reflective of the community we serve.”

Ottawa hired 25 new officers in 2016. Of those, five were women and six were racial minorities. Insp. Carl Cartright, who leads recruitment for police, said Ottawa is competing with other police forces for the same pool of diverse and qualified candidates. 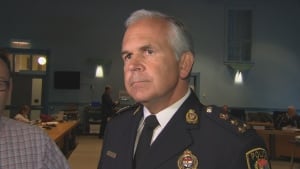 Ottawa police chief Charles Bordeleau speaks to reporters before a meeting of the Ottawa Police Services Board. (CBC)

The OPP announced last year it would be scrambling to hire 500 officers by the end of 2017, Cartright told the Ottawa Police Services Board Monday.

He said that means Ottawa will need to get ahead of the competition if it wants to attract the best people who represent all the communities of the city.

Almost half of Canadians would try edible ...