Glengarry-Prescott Russell MPP Amanda Simard continues to encourage Franco-Ontarians to pressure her government over proposed cuts to French-language services — while remaining coy about her future with the Progressive Conservatives.

The eastern Ontario MPP took questions at a packed public meeting at an arena in St. Isidore Sunday, where her constituents both commended her for standing up to the PCs and asked what she’d do next.

Last week, the PCs revealed their plans to fold the responsibilities of the French language service commissioner into the office of the provincial ombudsman.

In an announcement last Friday, however, the premier vowed instead to maintain the language commissioner within the ombudsman’s office.

Ford also promised to turn the Office of Francophone Affairs into a ministry, with Caroline Mulroney taking on the role of minister of francophone affairs.

He said his office would also hire a senior policy adviser responsible for francophone affairs.

Despite those concessions, the government will not restore funding for a proposed French-language university.

The Ford government has said the cuts are necessary to eliminate a $15-billion deficit, but that explanation hasn’t gone over well with Franco-Ontarians.

At Sunday’s meeting, Simard called Doug Ford’s concessions one step forward for three steps back. She said the cuts were reckless and left her shocked. 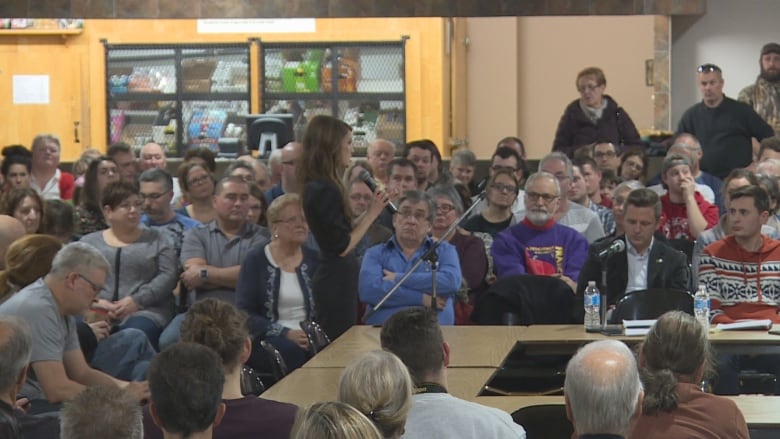 About 300 people pack a meeting organized by Glengarry-Prescott-Russell MPP Amanda Simard about proposed cuts by her own government to French-language services. (Krystalle Ramlakhan/CBC)

As she spoke out against her government, some of the roughly 300 people in attendance wondered aloud about her future with the PC Party.

When asked how she could remain with a party that’s hostile to the francophone community, Simard replied in French, “Good question, good question.”

She also said her position remains to be seen.

Simard questioned about staying with PCs

Simard also downplayed a Toronto Star report from Friday that suggested she might be considering switching parties.

“I don’t know where that came from, but it didn’t come from me,” she said in English.

Carol Jolin, president of the Francophone Assembly of Ontario, encouraged Simard to remain allied with the PCs.

“It’s very important to have people like that willing to go there and talk to Mr. Ford and say, ‘This is not right.'” 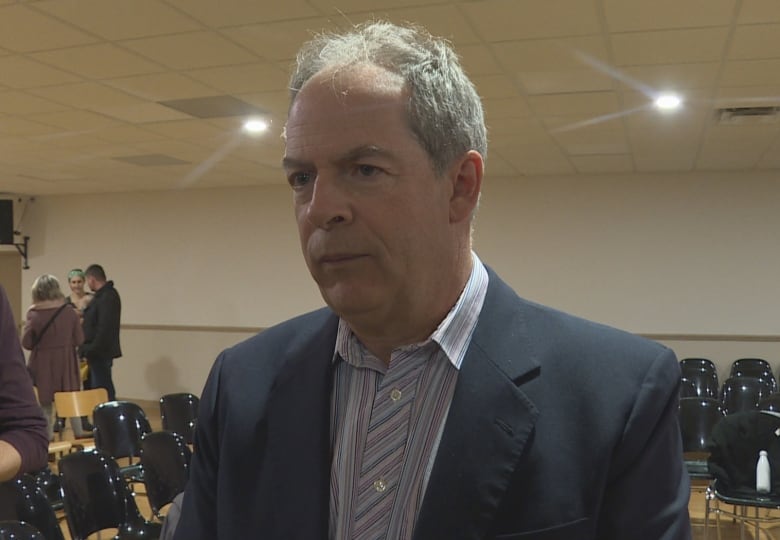 Carol Jolin, president of the Francophone Assembly of Ontario, says it’s important for the francophone community to have a voice like Simard to advocate for them. (Krystalle Ramlakhan/CBC)

‘Force to be reckoned with’

Simard said she hopes to continue influencing the government from the inside and encouraged Franco-Ontarians to join in more than 40 demonstrations planned for Dec. 1 across Ontario.

“This has been going at like a very fast speed. And I think we’ve been successful in some terms, because there has been a reaction from the government,” Simard said.

“That’s already one step, and so now, I think we can do more.”

Caroline Lamarche attended the meeting, and said she worries about the province’s commitment to protect Franco-Ontarian culture and heritage.

“What I feel is that they’ve tried to take a lot away from us, and [are] just giving us little crumbs back so that we keep quiet. And, well, we’re not going to do that,” said Lamarche.

“We have the same amount of rights [as] anglophones … we are a force to be reckoned with.”