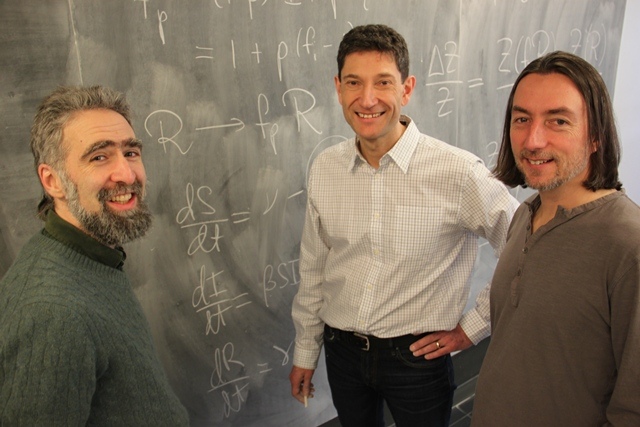 Fever-reducing drugs may be causing thousands more flu cases every year in North America by making people infected with flu more contagious than they believe, according to new Canadian research that suggests there’s an upside to feeling sick.

Fever helps the body eradicate invading organisms. Higher body temperatures make it harder for influenza, and other viruses and bacteria to reproduce.

But emerging evidence suggests that when people sick with flu take over-the-counter medications containing acetaminophen, ibuprofen or other fever-lowering drugs, the virus reproduces more efficiently and people end up with more virus in their bodies. The result? Higher “viral shedding,” meaning people give off more of the virus when they cough or sneeze than they would have if they had allowed the fever to run its course.

And, because they feel better, they’re more likely to leave home and spread the infection to others.

Using mathematical modelling, researchers from McMaster University in Hamilton, Ont., estimate that “at least 700 deaths per year (and many more serious illnesses) could be prevented in the United States alone by avoiding antipyretic medication (fever-reducers) for the treatment of influenza.”

Overall, fever suppression increases the expected number of influenza cases and deaths by five per cent during a typical flu season, and by one per cent during pandemic years, the team writes in the journal, Proceedings of the Royal Society B.

“We’re not saying don’t take the medication,” said lead author David Earn, an investigator with the Michael G. DeGroote Institute for Infectious Disease Research and a professor of mathematics at McMaster. “That’s something people need to decide for themselves when they’re sick and hopefully in consultation with physicians.”

But he said people are more likely to infect others if they take antipyretics.

“So if you decide to take these drugs to make yourself feel better, then consider still staying home, or keeping your kids at home, and not letting them go out into the community” until they have completely cleared the infection, he said.

Influenza can spread rapidly from person to person. According to the Public Health Agency of Canada, an average of 12,200 flu-related hospitalizations, and 3,500 deaths, occur in any given year in Canada.

Studies suggest that about 35 per cent of people infected with flu develop fever. But fever helps the body slow the growth of the virus and keep it from replicating.

Experiments in ferrets — considered the optimal animal model for human flu — have shown that more of the virus is shed in the nasal secretions of flu-infected ferrets if the animals are given fever-lowering drugs. Their viral loads also decrease less rapidly than in untreated ferrets.

Other studies have shown that reducing fever increases viral shedding in human volunteers with rhinovirus — the virus that accounts for most human cold infections — and keeps children with chicken pox infectious longer, the team writes.

“The same thing is probably true for any viral respiratory infection, but we were particularly concerned about influenza, because people die of influenza,” Earn said.

Some believe widespread use of aspirin during the 1918 Spanish flu pandemic that killed 50 to 100 million people worldwide “may have increased disease severity, and consequently death rates, during the pandemic,” his team writes.

The researchers reviewed the published data and used a mathematical model to calculate how the increase in the amount of virus given off by people taking fever-reducing drugs would increase the overall number of flu cases at the population level as a whole during a typical flu season, or during pandemic outbreaks caused by a new flu strain.

The team estimated from previous data that between 28 per cent and 95 per cent of people infected with flu take medications containing fever-reducing drugs, and that those drugs increase viral shedding by about 80 per cent.

The study is co-authored by McMaster professors Ben Bolker and Paul Andrews.

The research is important, said Ottawa virologist Earl Brown. While high fevers need to be treated, “quite often people take these drugs to decrease the symptoms so they can cope better,” he said. “But really what you’re doing is taking away part of your fight against the virus.”

Anti-Aging: Are you taking the wrong vitamins?