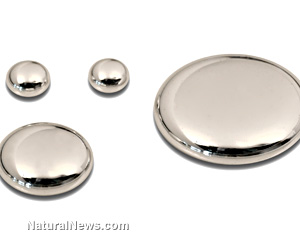 (NaturalNews) Infamous for poisoning the kidneys and brain, mercury is a potent, silent destroyer of healthy cellular function. Mercury compounds can be readily absorbed through intact skin – inducing toxic, dermal effects. As a melanotoxin, mercury compounds are capable of decimating melanosomes, which are tiny “balloons” in the skin that consist of melanin.

There’s a dangerous practice going around regarding the manufacture of skin-lightening, “beauty care” cosmetics.

Many skin-lightening products, anti-aging lotions, and acne creams contain unprecedented levels of mercury. This mercury is rubbed directly into the skin, where it is readily absorbed into the body.

Mercury levels are reportedly so high in some skin products around the world that the FDA has issued a public statement warning consumers not to use skin creams, beauty products and lotions that might contain mercury.

In a new report from the Loma Linda University School of Medicine, hundreds of skin-lightening products from around the world were found to contain extraordinary levels of mercury that exceed FDA standards 10,000 to one!

The FDA limits companies to 1 ppm mercury in cosmetic products. Some of the products being tested at the Loma Linda University reach 10,000 ppm of mercury!

The products are typically marketed as anti-aging treatments, capable of removing freckles, wrinkles and blemishes. These same formulas are often used as acne treatments. The toxic metal mercury abounds in these skin creams, labeled alternatively as mercurous chloride, calomel, mercuric or mercurio.

“Even though these products are promoted as cosmetics, they also may be unapproved new drugs under the law,” says Linda Katz, M.D., director of FDA’s Office of Cosmetics and Colors.

Charles Lee, M.D., a senior medical advisor at the FDA, states, “Exposure to mercury can have serious health consequences. It can damage the kidneys and the nervous system, and interfere with the development of the brain in unborn children and very young children.”

Furthermore, mercury from these skin creams can be breathed in or accidentally swallowed. Infants can receive a toxic dose if they touch parents who use these creams. A little one is prone to come into contact with the cream and put their affected hands and fingers into their mouth, and thus begin ingesting high traces of mercury.

California University tests 549 skin creams from around the world

Many of these mercury-containing beauty products are imported into the US and are sold online. In the study from Loma Linda University, 549 skin-lightening products were purchased from 32 different countries. This included online sales from countries like Taiwan, Japan, China, Thailand, Sri Lanka and the US.

Of the products purchased in the United States, 18 products were found to contain mercury levels exceeding 1,000 ppm – a truly toxic dose. Overall, 6 percent of the 549 products tested from around the world contained mercury in excess of 1,000 ppm. Nearly half of those products contained over 10,000 ppm mercury!

A 39-year old woman from Northern California sought medical attention when mercury toxicity symptoms began setting in. Found to have more than 100 times the average amount of mercury in her urine, the woman showed symptoms of mercury poisoning, including weakness, insomnia, pain in the extremities and severe headache. According to the California Department of Public Health, the woman and her husband had used an unlabeled mercury-containing face cream for three years. Brought in by a relative from Mexico, the cream was found loaded with mercury. The husband and their four-year-old child also had high levels of mercury in their urine. The problem, mercury, was isolated.

In another case, a teen had come down with mercury poisoning symptoms. In just months, the fatigue penetrated him. The Texas Department of Health couldn’t find the source of contamination in the teen’s environment, including paint, soil and indoor air tests. The family continued to look for solutions and finally realized the answer. The teen regularly used an acne cream called “Crema de Belleza-Manning.” After laboratory testing confirmed that the product contained 6 percent to 10 percent mercury weight (labeled as mercurous chloride), the teen stopped use and saw improvements.