Reports that a man accused of sexual assaults on six Edmonton teenage girls was a Syrian refugee have ignited a firestorm of reaction, from anti-immigration diatribes to criticism about how the media dealt with the story.

Groups that work with refugees in the city have been inundated with calls and texts over the past 24 hours, some from people calling for an end to the refugee program and others from refugees themselves apologizing on behalf of their community.

Erick Ambtman, executive director of the Edmonton Mennonite Centre for Newcomers, said his organization received a message on Twitter from a white supremacist group that included a picture of a Syrian refugee, asking the centre to confirm whether the photo was the same man accused of the crimes.

“It may be just to scare us or to unnerve people,” Ambtman said.

“And the Syrian students are apologizing for somebody who they don’t even know, because he’s got the same country of origin as they do.

Soleiman Hajj Soleiman, 39, was arrested Saturday and charged with six counts of sexual assault and six counts of sexual interference after six teenage girls, all younger than 16, told police they were inappropriately touched while swimming at the West Edmonton Mall water park.

When Edmonton police announced the charges on Wednesday, they urged any other complainants or witnesses to contact them. One more complainant and one more witness have since come forward, police spokesperson Scott Pattison said Thursday.

The man charged in the case was a Syrian refugee who arrived in Canada in January 2016, a fact that was reported Wednesday by numerous news outlets, including CBC News.

The story was quickly picked up by alt-right websites and anti-immigration groups. It was shared widely on social media. 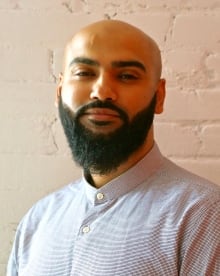 “It’s going to inflame a segment of our population who already harbour a bias, a discrimination or unfair views towards newcomers,” said Huque, whose group last year helped resettle 250 Syrian refugees.

“I think this certainly emboldens them.”

Huque said the case is already being used to incite fear of new immigrants, and has cast a negative light on thousands of refugees.

“The insertion of two words — Syrian refugee — completely changed the dimension of the story,” he said. “What was initially a local crime story became a wider discussion about screening practices, immigration levels. It just turned into an entirely different debate.”

‘It’s not relevant to the story’

Huque said the suspect’s immigration status is not relevant to the crime, and journalists had a duty to keep those details out of their coverage. He said news outlets, including CBC, are often inconsistent in their reporting on the racial backgrounds of suspects.

Deciding who to publicly identify without recognizing the hostility towards immigrants will make already vulnerable people targets for more hatred, he said.

“If this person was Caucasian, that wouldn’t have been identified in any way, because it’s not relevant to the story. And his immigration status certainly shouldn’t be.

“Responsible journalists should be aware of the political climate, so when we use that kind of language or when we ascribe a community to an individual, we need to be wary of the implications,” Huque said.

When the media reports stories like this one, decisions about what information is relevant have to be made on a case-by-case basis and sometimes on a day-by-day basis, said David Tait, a professor at Ottawa’s Carleton University who has taught ethics courses at the journalism school.

“Journalists have to sort of go and look at a situation not from the standpoint of, ‘Is there public appetite for this information? Do people want to know it?’ But, ‘Is that detail relevant at this stage to this story?’

“And that’s a very difficult thing to determine as a journalist, because you also have to be careful that you’re not making your judgment for some sort of social engineering purpose.

‘Our job is to report what’s going on’

Tait said in this case, while reporting immediately after the arrest was made public, he would have questioned whether details about the accused’s background were relevant.

It’s the responsibility of journalists to try to determine what the public needs to know to understand the story. Once the public has the information, people will make their own choices about what’s relevant to them, he said.

Some will seize on information that confirms their own views about the world and overlook other aspects of the story.

“Our job is to report what’s going on out there in the world,” he said.

The story about the water park allegation, Tait said, “is a classic example of where people these days are rushing to grab details, to use individual facts as weapons instead of looking at those details and saying, ‘How does this fit into my developing understanding of the world?'”

Ambtman said Soleiman came to Canada in January 2016 with his wife and six children, aged one to 13 years. The family was assisted by the Mennonite Centre.

Some commenters are exploiting the fact that a Syrian refugee has been charged with a crime, he said.

“They’re exploiting what’s happened to these girls to say something about immigration, and it’s just a really ugly thing to do. It’s been pretty awful to bear witness to.”

It will be up to the justice system to determine the facts of the case and, if a crime has been committed, punish the person responsible, he said.

“To make this about immigration is just absurd. What has happened is there has been a sexual assault at West Edmonton Mall and six girls are going to be traumatized likely for the rest of their lives because of a crime that somebody perpetrated on them. To me, that’s the concern.”