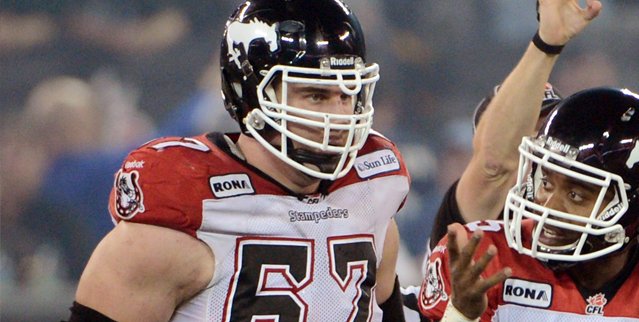 CALGARY — Calgary Stampeders offensive lineman Dimitri Tsoumpas has announced his retirement as a player in the Canadian Football League.

A four-time West Division all-star and a three-time CFL all-star, Tsoumpas will remain with the club as a strength and conditioning assistant.

“I love football and I’ve thoroughly enjoyed my time with the Stampeders, so this is a very difficult decision for me to make,” said Tsoumpas.

“I’ve fully recovered from the concussion that I suffered last season but because of the lengthy and difficult recovery period, I just feel that I needed to err on the side of caution and put an end to my playing career.

“As difficult as it is to retire as a player, I’m very grateful to the Stampeders for the chance to remain with the team and work in the field of strength and conditioning, which has been a longtime passion of mine and something I would like to be the focal point of my next career. I’m looking forward to this new chapter in my life.”

Tsoumpas was selected in the first round (second overall) by the Stampeders out of Weber State in 2008 and immediately became a fixture at right guard as he started every game in what would be a Grey Cup-winning season for the Red and White.

He played and started a total of 88 regular-season games as well as nine playoff contests for the Stampeders and helped pave the way for Calgary running backs to win four rushing titles in six years. Until suffering concussion in Week 7 of the 2013 season, Tsoumpas had missed only two games due to injury during his career.

The 28-year-old Edmonton native was also active in the community, most notably as the Stampeders’ official representative for CUPS Health and Education Centres.

“Dimitri was a pillar of our offensive line from the day he arrived in Calgary and I thank him for everything he has done for the Stampeders on and off the field over the past six seasons,” said Stampeders head coach and general manager John Hufnagel. “His play in the trenches and his strength of character will be greatly missed. I know this wasn’t an easy decision for Dimitri and I am very pleased that he has chosen to remain with the club as a strength and conditioning assistant.”

“I’d like to thank all my teammates over the years, Coach Huff and his staff and Stampeders fans for everything they have done for me during my career,” said Tsoumpas. “I’m proud of everything that we were able to accomplish during the past six seasons and I will especially fondly remember our Grey Cup win in 2008.”

The Great Debate: Where will Collaros land ...