The west-end Myers Riders youth football club has launched a petition to ask the city for a designated home playing field, after their league deemed their previous field “unsafe” for football teams to use.

The Myers Riders say they’re one of the only clubs in the National Capital Amateur Football Association that doesn’t have a home field, forcing parents to drive their children to fields all over the city — sometimes as far away as Carleton Place, Ont. — for practices and games. 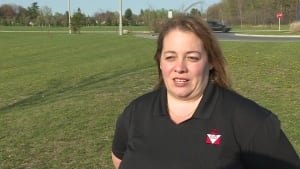 The fields at the Nepean Sportsplex were deemed unsafe for football after the artificial turf was updated for field hockey use, says Myers Riders registrar Tina Milito. (CBC)

The club has spent years playing at the Minto Field at the Nepean Sportsplex, but it’s no longer an option after the turf was updated in the fall for field hockey, leaving it too rough and abrasive for football, with some comparing it to “sandpaper.”

“It’s not something we can deem safe to use this year,” said Tina Milito, a registrar with the Myers Riders.

“So we are stuck now scrambling to go to fields outside of our territory, which are longer drives for our families and maybe not so convenient, especially for anyone who would bus, who maybe doesn’t have that car luxury,” said Milito.

Milito said having a home field is also a point of “pride” for the Myers Riders football players, who are between the ages of eight and 18.

The club’s petition is calling on the city to allocate one of the soccer fields at Ben Franklin Park in Nepean as its designated field for practices and home games.

Most of the Myers Riders’ players live in city Coun. Keith Egli’s ward.

On Wednesday, Egli told CBC News the city is prepared to give the club a home field at the Terry Fox Athletic Facility for the 2017 year.

Egli said allocating a field at Ben Franklin Park — as the Myers Riders are requesting — isn’t an option because the fields there are in high demand from soccer teams.

But Scott Boxall, the head coach for the Myers Riders “Mosquito” team, said the field at Terry Fox is not as convenient for families, will still leave them without a home field for this season, and will need to be altered.

“It’s a good start,” said Boxall. “I think … they need to do a lot of repairs to that field … they have to stop using it as a hammer throw field and a javelin field, mainly because of the dents and divots it leaves. It’s not safe for the kids to play on.”

Boxall added he feels the city doesn’t give football teams the same priority it does for soccer squads, but a simple solution could exist to keep everyone happy: building multi-purpose fields.

“There’s always a lot of soccer fields that go up. [But] if you made them more [of] a multi-purpose field where soccer nets can be rolled on to the field … and if the lines are painted for football and soccer and other sports, I think the city would benefit more from that too,” he said.