Thousands of old “Economic Action Plan” signs dotting the Canadian landscape are not captured by a new federal advertising crackdown and will remain in place until whenever individual funding recipients get around to taking them down.

The Liberals introduced new federal policies this month designed to lift the taint of partisanship from publicly funded ads — a direct reaction, they said, to the former Conservative government’s behaviour.

But clearing away the last vestiges of the Conservatives’ whole-of-government, Economic Action Plan branding exercise is not Ottawa’s responsibility, the Privy Council Office told The Canadian Press.

“Please note that project signage for funded projects is not considered advertising,” PCO spokesman Raymond Rivet said in response to questions about the new ad policy and the old signs.

“Advertising consists of things like paid billboards and transit posters. Removal and disposal of signage is done by the organization leading the project…. Thus, any signage removal was/is undertaken by the funded organization in accordance with the contribution agreements.”

Moreover, the new policy came into effect May 11 and does not apply to “communication products” placed by previous governments.

When he announced the new rules at a May 12 news conference, Treasury Board President Scott Brison repeatedly stated “the policy applies to all government advertising and communication.”

And while he didn’t cite the Economic Action Plan by name, the Liberal minister justified the “strong policy response” by stating the “previous government, we believe, crossed the line repeatedly in terms of advertising and communication and in a way that was abusive of taxpayers interests and of democratic values.”

The new policy, he said, covers political party slogans, images or any kind of party affiliation.

Tens of millions of dollars were spent over the years advertising the Economic Action Plan, which was simply a slogan and marketing device for the Conservatives’ massive, recession-fighting deficit budget of 2009 but continued uninterrupted through their final 2015 budget. Signs were still going up on new federally funded projects last August during the general election campaign.

The EAP, as it was known, even had its own internal government “Style Guide: Project Signage” that was explicit about signs being an integral part of “maintaining the integrity of the brand … for all communications products and activities including announcements, releases, advertising, marketing materials, web sites, backdrops and signage.” 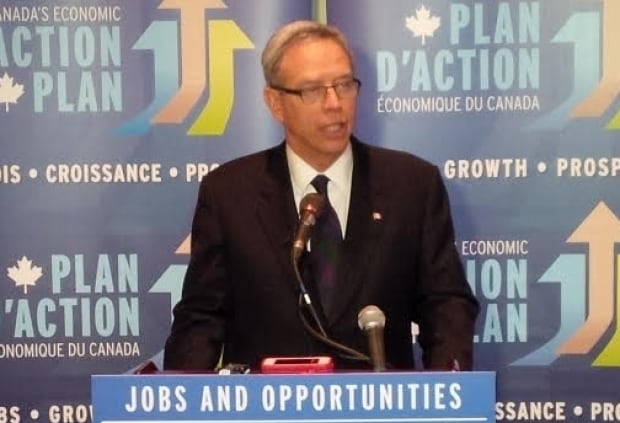 The Conservatives branded their budgets and much of their economic or infrastructure announcements with the Economic Action slogan and signage. (Marie Morrissey/CBC)

Such unique branding is forbidden under the new policy, said PCO’s Rivet, but it doesn’t mean the end of placards heralding federally funded projects.

“Project signs are allowed if they use the official symbols correctly and adhere to the other requirements of the new policy, including the new definition of non-partisan,” said PCO, the central bureaucracy that serves cabinet and the prime minister.

As for the remaining EAP signs out there, PCO says it doesn’t centrally track the number — although at one point in 2010, 18 different federal departments and agencies were tracking sign placements and making mandatory weekly reports, which then found their way into memorandums for prime minister Stephen Harper.

“This does not translate directly to the number of signs that could still be present, as some of these initiatives have since been completed; however this is the latest data available prior to the program ending.”

Those active projects don’t include thousands of older projects long since completed. All are dependent on the local project manager for removal of signage.

At least some EAP funding agreements dictated that a sign had to be erected before the infrastructure would be deemed completed, with 20 per cent of funding held back until proof the distinctive sign was up.