Filipinos in Canada supported the man described as the Philippines’ Donald Trump at nearly twice the rate of support found in their home country during its presidential election.

While it now appears the tough-talking Rodrigo Duterte has won the election with 39 per cent of the popular vote in that country, he’s the runaway favourite among Filipinos voting in Canada, capturing almost 70 per cent support.

Voting took place over the weekend in Canadian cities and by Tuesday, the Philippine Embassy in Ottawa collected, tallied and announced the results as a small group of ex-patriots showed up to watch.

Among them was Mary Larracas who said she has lived in Ottawa for 25 years, but remains intensely devoted to the country where she was born.

She voted with two other family members in Ottawa this weekend and took meticulous notes Tuesday as the support for Duterte became clear. 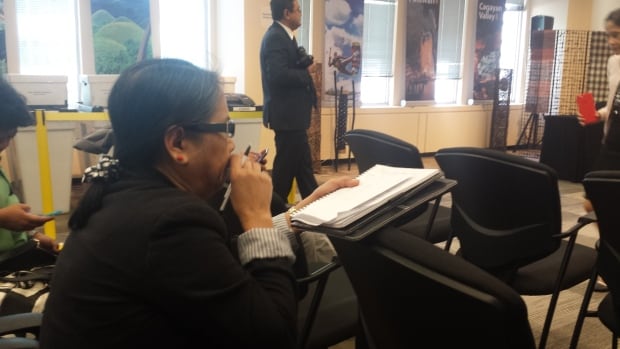 Mary Larracas says this is “a very very important election” for her native Philippines. (Amanda Pfeffer)

“This is a very very important election for the future of our country,” said Larracas, who wasn’t shy to admit she supported Duterte.

She said she wants a different future for the Philippines and thinks the tough-talking former mayor of the central city of Davao is just the man to bring that change.

Duterte is now considered the Philippines’ president-elect, though final results are still being counted.

Vanessa David has been marvelling at the level of interest among the diaspora living in Canada.

She was also at the embassy Tuesday, recording the event for the Canadian affiliate of the Filipino Network ABS-CBN Corporation. 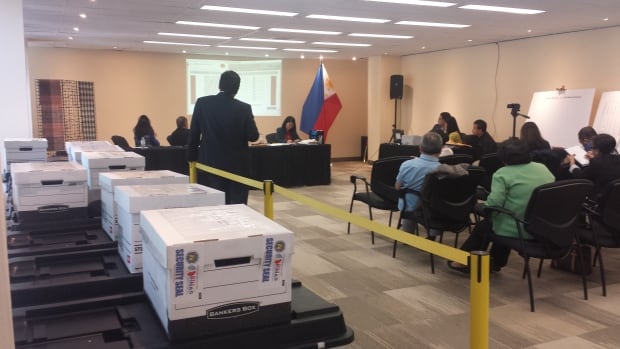 A group watches as 2016 election results from Canadian diaspora are announced at the Philippine Embassy in Ottawa. (Amanda Pfeffer)

“It’s been really passionate,” said David, adding social media among Filipinos in Canada has been very heated over the campaign to elect the polarizing Duterte.

Parents have to block children’s ears during Duterte speeches filled with spicy language.

He’s spoken openly about his sex life, and has joked about the gang rape and murder of an Australian missionary in 1989.

“Many people were upset about that, including myself,” explained David, laughing at the notion of forgiving him.

“At this point, all I can do is support the new government,” she said. “It will be interesting to see.”

Duterte is also credited with a brutal crackdown against crime as the mayor of Davao and his tough-on-crime stance has been popular among many Canadian Filipinos.

David credits his candidacy for the rise in interest among eligible voters in Canada.

The minister and consul general at the Philippines Embassy in Ottawa Eric Tamayo confirms he’s seen that interest first hand.

“It goes to show how interested our nationals are in taking part in this exercise.”

Tamayo said the diaspora in fact have a lot of power worldwide, with the money sent back to the Philippines representing about 10 per cent of that country’s GDP.

The vote for vice president, in fact, could hang on the results from Filipinos living abroad since it is too close to call.

Votes from Canada are being sent to Manilla for a final tally.