A repentant Prime Minister Justin Trudeau apologized Thursday morning for the third time in two days for a physical encounter with two opposition MPs that resulted in a melee on the floor of the House of Commons the day before.

Trudeau’s apology came as members of Parliament debated a privilege motion by Conservative MP Peter Van Loan on “the physical molestation” of a female MP in the House of Commons.

MPs agreed as debate resumed after question period to send the matter to a committee — a decision supported by Trudeau hours earlier.

On Wednesday, Trudeau walked across the aisle and into a clutch of NDP MPs where he took Conservative Party whip Gord Brown by the arm, elbowing NDP MP Ruth Ellen Brosseau in the process. The prime minister “unreservedly” apologized for the physical contact which he said was “unacceptable.”

The incident took place just as some MPs were trying to stall a contentious vote to limit debate on Bill C-14, the government’s assistance in dying bill.

“No amount of escalation or mood in this House justifies my behaviour last night. I made a mistake, I regret it. I am looking to make amends,” Trudeau said on Thursday.

“I fully hear the desire… of a number of members across the House including the leader of the Official Opposition that we take concrete measures to improve the way the tone functions in this House and the way this government engages with opposition parties as well.”

“I am apologizing and asking members to understand how contrite and regretful I am over my behaviour,” Trudeau said again later.

“I wield full responsibility for my poor choices last night, and I ask for Canadians’ understanding and forgiveness.”

The prime minister spoke Thursday after Interim Conservative Leader Rona Ambrose said in a scathing statement  in the Commons that Trudeau’s behaviour was “out of line” and “unbecoming of a leader.”

“He had no business on this side of the House, he had no business anywhere but on his own seat. Everything he did from the moment he rose from his seat was unnecessary and unsettling,” Ambrose said on Thursday. Adding to the acrimony seen in the Commons the day before, was a motion that would give the government new powers to control the business of the House for the next five weeks.

Formally known as motion number six, Ambrose said while she welcomed the prime minister’s apology, he should withdraw the motion which she called “extreme and aggressive.”

“I appreciate the prime minister’s apology, but he’s saying he wants to move forward. And he wants to do that responsibly and together. I don’t know how we can do that unless he removes this motion that he has on the order paper,” Ambrose said in the Commons Thursday.

“If he truly respects the role of Opposition, and the role of every member of this House then he has to withdraw the motion,” the leader of the Opposition said. Scheer says we expect meltdowns from celebrities not Prime Ministers0:53

“What you have before you is the opposition parties united in our condemnation of the anti-democratic tactics of this Liberal government,” Sheer said, flanked by the other opposition MPs.

Julian said he welcomed the prime minister’s apology, but called it a “first step” in restoring decorum in the Commons.

“The government, I do believe, has a responsibility to put things back together and they can do that by withdrawing motion six. That’s why we’re all here.”

May, who said she wanted to stay above the political fray, said Trudeau was not exclusively to blame for the events that transpired in the “pressure cooker.”

“I think it’s likely there may have been blame on all sides in leading to the escalation,” May said at the opposition press conference.

‘The member was very shook up’

NDP leader Tom Mulcair spoke briefly Thursday and only in French, thanking Ambrose for the “dignified” tone she brought to the debate.

Mulcair, who was seen shouting at Trudeau in the Commons the day before, asked Ambrose when it was that she first realized that the prime minister “hurt” Brosseau.

“We know that the member was very shook up and these things affect people,” Ambrose said adding, “we all are thinking of her and I know, again as I said, in these kinds of situations whether personal or professional, it’s not for her to fix this. It’s for him [the prime minister] to fix this.”

Following the incident Wednesday night, Trudeau stood to “apologize unreservedly” for his actions and said he would look for ways to make amends to Brosseau. 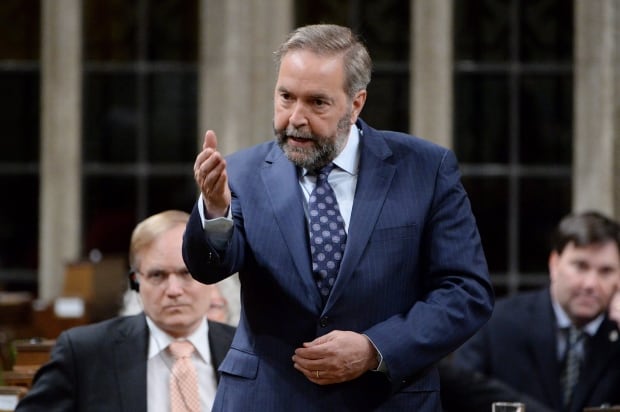 NDP Leader Tom Mulcair rose in the Commons as members of Parliament debated a privilege motion by Conservative MP Peter Van Loan on “the physical molestation” of a female MP in the House of Commons. (Adrian Wyld/Canadian Press)

“It’s a mistake to conflate what happened last evening with any specific legislation. The prime minister has been clear that the environment in the House, the tension in the House yesterday, was no excuse for what he did,” Brison told reporters in the foyer of the House of Commons.

“To conflate the two in my view is to diminish the importance of what the PM has done today… that would diminish the sincerity and the profound nature of his apology and his acceptance of responsibility and I think it’s a tremendous mistake to conflate a piece of legislation with what went on last night.”

Liberals back down on motion 6

By Thursday afternoon, the Liberals announced they would withdraw their motion to take control of the Commons agenda.

“We’ve listened to the comments made by all of our colleagues. I’d like to inform the House that a short while ago, we withdrew motion six from the order paper,” Liberal House Leader Dominic Leblanc said during question on Thursday.

Leblanc said he looked forward to working with all MPs as the Liberals seek to extend sitting hours and allow for a more “respectful” debate on the government bill on doctor-assisted suicide.

Ambrose called the decision a “great start” but urged the government to give all members the opportunity to speak on what has been a difficult and emotional debate.