Students at an Ottawa high school with one of the most ethnically diverse student populations in the city are assembling a small library for young readers in the troubled First Nation of Attawapiskat.

The idea came to students at Ridgemont High School last month when they learned that young people in the northern Ontario community were asking for reading material.

In April, overwhelmed by the number of suicides and suicide attempts — many by young people — Attiwapiskat’s chief and council declared a state of emergency.

The Cree community on James Bay, home to about 2,000 residents, saw 28 suicide attempts in March alone.

Ridgemont librarian Ruth McKeague and other teachers at the Alta Vista school reacted by creating an online wish list of books on Amazon, then sharing it on social media.

Other schools pitching in

Students from other Ottawa high schools have fundraised toward Ridgemont’s library-building project.

Many Ridgemont students paid for the new books themselves.

‘These people need to be shown they are supported by the community, and we are there for them.’ – Fatima Beydoun, Ridgemont High School student

“When we saw that this was happening and they were living in such poor conditions … Well, I come from Lebanon and I’ve been to, like, the poorest places in Lebanon and they don’t even live that way,” said 17-year-old Fatima Beydoun.

“So we decided that these people need to be shown they are supported by the community, and we are there for them.”

Beydoun is preparing to study international development at the University of Ottawa in the fall, and spent some time learning about the dire conditions in Attawapiskat.

In the end, Beydoun decided on a lighter read to send north: Jeff Kinney’s Diary of a Wimpy Kid, the popular satirical fiction series for young readers.

“I thought that would be something that would create happiness amongst the children who live in Attawapiskat.”

The pile of books destined for Attawapiskat contains some classics, too.

“Dr. Seuss is a must for every child,” Beydoun laughed, picking up a new copy of Green Eggs and Ham. “I literally have this memorized.

“And this book caused so much controversy and conflict amongst the Grade 3 class!” joked Beydoun, flipping through a brand new edition of the E.B. White classic, Charlotte’s Web. 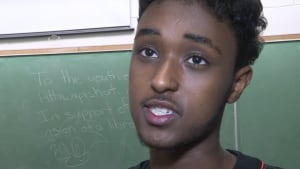 Yassin Mohamed, 18, donated Start with Why: How Great Leaders Inspire Everyone to Take Action by Simon Sinek. (Stu Mills/CBC)

Yassin Mohamed, also graduating from high school this year, is sending Start With Why: How Great Leaders Inspire Everyone to Take Action, a book by Simon Sinek about using positive energy to create change.

“They could see how they can have an effect,” the 18-year-old said. “Even though they’re isolated and secluded … they still have an ability to have an impact, do their own thing, and use their own creativity, their own skills to create what they want.”

Students have included a hand-written postcard to the residents of Attawapiskat with the shipment of books.

“Know that there are people out there who care and are willing to help. Even though it may seem like it, you are not alone. Stay strong and keep going,” read student Adam El-Sayed, 17.

“I wanted to give them some kind of hope,” El-Sayed said of the message.

​On Wednesday, teacher-librarians and library volunteers from several schools within the Ottawa-Carleton District School Board were set to descend on Ridgemont to pack up the books for shipment to Attawapiskat.

On Saturday McKeague will deliver the books to a storage depot, where they’ll be added to a load of donated goods destined for the northern Ontario community. 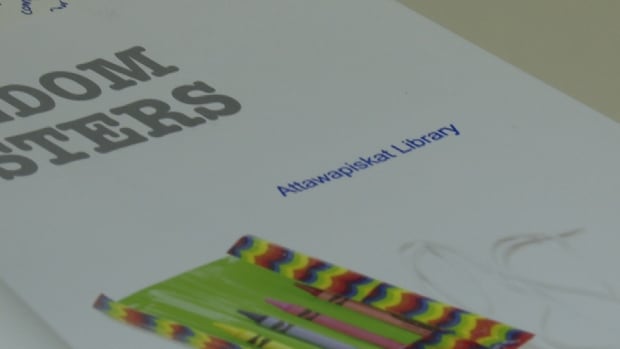 Ridgemont High School had a special stamp made for the books being donated to the James Bay community. (Stu Mills/CBC)