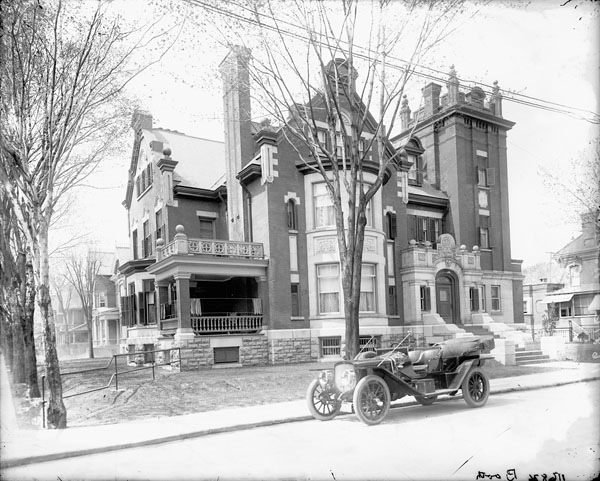 Booth House on Metcalfe Street, circa 1910. Photos from Library and Archives Canada unless otherwise noted.

Like its western cousin O’Connor Street, Metcalfe Street was greatly impacted by Jacques Greber’s urban plans for Ottawa. As I noted last time, in his initial 1938 surveys, Greber considered Metcalfe or O’Connor as viable alternatives to Elgin as grand boulevards. His later studies ruled them out in favour of Elgin. But he didn’t completely abandon tampering with the street patterns. Since the late 1950s, Metcalfe has been a one way-street heading north, while O’Connor has been one way heading south. Since then, all official city plans designate these two streets as arterials, and as such, a once desirable residential area has become a comparative dead zone, an island marooned by waves of traffic. Looking north on Metcalfe and Somerset (1938).

Although there has been high-rise development at the northern end of Metcalfe, much of the southern and central portion of the street has retained some of its original late 19th and early 20th building stock. In 1904, Anson Gard, writing in Hub and Spokes, declared: “Say, if you ever come to Ottawa, go out to…Metcalfe Street…and see as many really beautiful homes as you will find in the same length in any city I know.” (Here’s what the street looked like in winter and summer 1893) This was a street of Cabinet Ministers (Hon. Clifford Sifton, Minister of the Interior and Indian Affairs; William S. Fielding, Minister of Finance), an Opposition Leader (R.L. Borden), as well as high ranking business people, Ottawa mayors, and members of parliament.

Former Prime Minister Sir John Thompson lived in four homes near the intersection of Metcalfe and Somerset between 1888-1894. The colourful Ottawa businessman, mayor, and MP Thomas Birkett built a castle-like mansion at 306 Metcalfe Street as a statement of his arrival into the upper middle class. Not to be outdone, lumber baron extraordinaire John Rudolphus Booth constructed his own statement of beauty, with an over the top Queen Anne Revival mansion at 252 Metcalfe. Leaving aside the marvellous monolith known as the Victoria Memorial Museum, the real untold story of Metcalfe is its Art Deco buildings. Constructed just before or during the Great Depression, these beautiful 4-7 storey structures are probably Ottawa’s greatest concentration of Art Deco architectural expression. While individual historic homes have disappeared over the years, these apartment blocks have endured, lending the street a natural old-world ambience. Here are a few gems worth noting (documented, among others, in a Spacing Ottawa Flickr photostream as you head north from the Queensway: the Windsor Arms, Trafalgar Apartments, the Mayfair, and the Duncannon (pictured above). The Windsor Arms is located between the Queensway and the museum. Designed by architect Cecil Burgess, the apartment complex is today perhaps one of Ottawa’s most overlooked buildings. Built in a restrained Art Deco style with Art Nouveau flourishes, the building features stained and leaded glass windows, wood burning fireplaces and a stunning entrance. The property holder Andrex Holdings has done a marvellous job in maintaining the place, and in 2009 won a heritage conservation award for restoration work, and in particular the upper staggered brick and stone parapets, which had collapsed but were rebuilt using the remaining stone and brick to match the original.

Much of Metcalfe’s Art Deco architecture is the work of Cecil Burgess. Burgess was English-born and trained, and when he arrived in Ottawa in 1908, worked as a draughtsman and assistant for the firm of Weeks and Keefer. He lived in the Glebe and later (Old) Ottawa South, and partnered with his boss, architect A. Le B. Weeks, under the company name of Weeks and Burgess. According to one writer, Jean-Claude Dube, he is perhaps second to W.E. Noffke in architectural output. Dube also notes that Burgess designed his buildings in a “Modern Classicism style (also known as Stripped Classicism) with elegant dashes of Art Deco in many of his later creations throughout Ottawa.”

Heading north again, at the northeast corner of Metcalfe and Gladstone, we find the Trafalgar Apartments. Built in 1931, it is a lower rise affair, also in the Art Deco style, and seems to have all of the Burgess trademark design characteristics: numerous windows, lots of white stone banding on the façade interplaying with red bricks, and lots of indentations on the façade.

Heading a little north again, we come to The Mayfair, a massive seven storey Art Deco complex just northwest of the intersection of Metcalfe and Gilmour. Built originally as an apartment hotel in 1938, it was designed by Hugh Archibald Richards (in collaboration with W.J. Abra) in a sophisticated yet restrained Art Deco architectural style. It was the subject of an interesting article a few years ago, in which the author noted that “it is one of the city’s few buildings of this vintage to operate as a condominium. Many residents have combined two units into one, which was the case with Apartment 4D. Ottawa, which has demolished virtually all of its 19th- and early 20th-century industrial buildings, is a hard place to find lofts.” Urbsite also posted an article about the design of its garage (comparing it with other Centretown apartment building garage designs, and noted in passing that the place is “a classic H-shape, which provided for more light to the units. On the west side the ‘H’ has been filled in – for more parking inside the garage.” A little further north, at Metcalfe and Cooper, is the wonderful heritage designated apartment complex known as The Duncannon. Conflicting documentation in the Biographical Dictionary of Architects in Canada attributes this place to Cecil Burgess (built 1931?) or to the architectural team of Abra and Richards (built 1934?). Looking at its design of this place, it looks closer in style to the other buildings Burgess worked on. Whatever the case, as you’ll see by the Flickr images, this is an especially pleasing design both inside and out. It has an indented red brick façade rising four storeys, with stone banding on the upper part, a deeply recessed front entrance, and Tudor Revival leaded glass windows. The photographer Yousuf Karsh liked it so much that in 1939 he moved in, and lived here with his first wife Solange Gauthier through the 1940s.

Much of Metcalfe Street north of Cooper has been covered over by modern high-rises, so little is recognizable from 1938. One exception is W.E. Noffke’s only foray into Art Deco, the 1928 Medical Arts Building between Lisgar and Nepean (pictured left). And what superb foray it is. Though only six storeys high, it gives the impression of greater height through the use of continuous piers (known as ziggurats), geometric ornaments, the large recessed and arched front entrance and Spanish arched window above it, and the indented front façade.

Another exception (and exceptional structure) is the landmark St. George’s Church (pictured below) at Metcalfe and Gloucester, which was built in the Gothic style in 1880 for the Metropolitan Methodist Church. It became St. George’s Anglican in 1885. Although it has had a number of renovations over the years, it has remained a constant presence in Centretown, and helps to round out our tour of Metcalfe Street. Grain of Salt tries to explore the ...