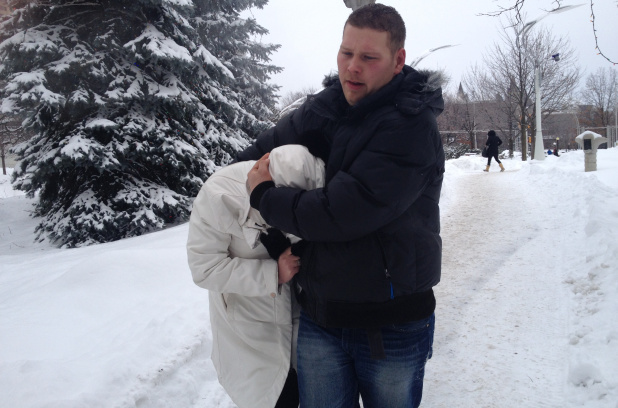 Former Royal Ottawa director Amanda Rousseau, 39, left, is shielded by boyfriend Ross Phillips outside the Ottawa courthouse Tuesday, Dec. 17, 2013 after learning she will be sentenced in January for defrauding her employer of nearly $20,000.

Amanda Rousseau left an Ottawa courtroom wearing her white parka again Friday morning, but this time, the coat was draped over her shoulders and her hands were cuffed behind her back.

The fallen Royal Ottawa Hospital director was sentenced to a total of 15 months in jail for defrauding her former employer and stealing thousands of dollars from a vulnerable woman in her care.

Rousseau will also serve two years probation, and must pay back the $19,763 she owes the Royal Ottawa Hospital Health Care Group and the $13,119 she stole from Tamara Wyman.

Although Rousseau, 39, had previously cried before the court, saying her son and daughter needed her, Justice Colin McKinnon was frank in his sentencing.

“The law is quite clear — fraudsters go to jail,” he said.

That was during Rousseau’s second sentencing hearing of the day concerning the nearly $13,000 she stole from Wyman, a 53-year-old patient in her care.

Justice McKinnon sentenced Rousseau to nine months in prison and two years probation, in addition to the six months of jail Rousseau was sentenced to earlier that morning.

Her first court appearance of the day concerned the nearly $20,000 she defrauded from her former employer, the Ottawa Health Care Group.

Justice Catherine Aitken said Rousseau has “shown minimal remorse” for the “white-collar crime.” Although $20,000 is not a relatively large sum, she said the fraud was “well-planned” and Rousseau had many opportunities to stop.

“Ms. Rousseau did not terminate her fraud activities – she was caught,” said Justice Aitken.

Rousseau pleaded guilty earlier this year to fraud and forgery charges. A financial assessment of the Royal Ottawa Hospital Health Care Group between April 2007 and March 2009 revealed Rousseau forged signatures and made false expenses. She was suspended from work and fired a month later.

She has been working as a hairdresser and Justice Aitken noted Rousseau’s employer described her as “extremely professional with clients.”